Among the most eye-catching early-spring flowering plants in the Forest Botanical Garden are the poisonous but fragrant Mezereon (Daphne mezereum), cream white Shrubby Honeysuckle (Lonicera fragrantissima), and Christmas Box (Sarcococca confusa), which has a pleasant scent, but very inconspicuous flowers.

Winter Heath (Erica carnea), which depending on weather conditions can start flowering around Christmas, is now at its flowering climax. The tiny flowers of the Persian Ironwood Tree (Parrotia persica), which originates from Mount Elbrus on the southern side of the Caspian Sea, start opening, yet show little more than the red anthers. Likewise flowering of the Field Elm (Ulmus minor) is noticed mostly due to the purple anthers and the copiousness of small flowers.

Cherry Prinsepia (Prinsepia sinensis) enchants the visitor with its small yellow flowers and pleasant odour. Also in flower during this time, the Common Hazel (Corylus avellana) by opening its male flowers and releasing pollen initiates the allergy season. During the first warm early-spring days lovely golden pollen sacs of the Goat Willow (Salix caprea) and Violet Willow (Salix daphnoides) serve as a rich supply of proteins for bees just on the onset of a new breeding season. 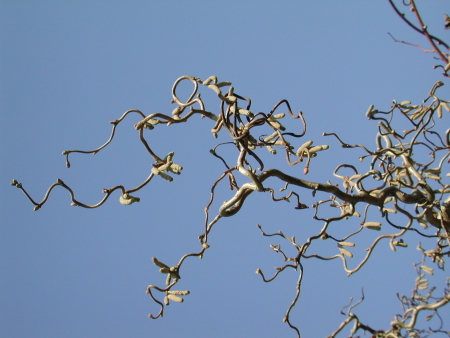 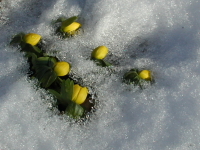