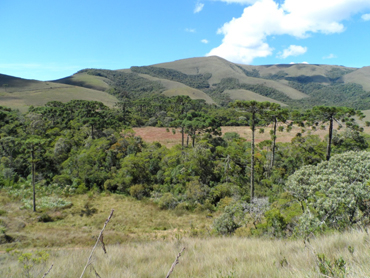 The Araucaria Forest is one of the most endangered ecosystems in Brazil, being characterized by the presence of Araucaria angustifolia (Bertol) Kuntze, with its dark green crown over the canopy. During the Quaternary, the Araucaria Forest distribution has expanded and retreated according to the climate fluctuations. Mainly, the increase in humidity during Holocene has allowed its expansion. Formerly occupying 200,000 km2, mostly in southern Brazil, but also in southeastern Brazil and in northeastern Argentina, it is reduced to approximately 3% of its original area concentrated on the highlands. Its distribution is correlated with humid subtropical climate, occurring in the colder areas between 500 m to 1,500 m a.s.l. in South and Southeast of Brazil.
The High Elevation Grasslands is a very sensitive vegetation type restricted to the summit of the Serra do Mar Mountain Range and to some plateau in southern and southeastern Brazil in subtropical and temperate climate conditions. It is a relict of a past vegetation from a drier and colder climate, interrupting the natural vegetation physiognomy. It occurs from 400-500 m a.s.l. to 1,000-1,500 m a.s.l. in the montane environments and above this for upper montane environments. It is composed mostly by herbaceous and shrubs species, presenting a high endemism level. Furthermore, it prevents erosion in lithosol and organic soils besides preserves the hydrographical system.
Shifts in the climate and environmental conditions along the last 20,000 years have affected the speciation, migration and extinction of species, ecological systems and ecosystems distribution. However, species and ecosystems are not always able to adapt to such abrupt new conditions caused by human in the last centuries, resulting in a large loss of biodiversity and systems. The tropical montane ecosystems are extremely susceptible to these interferences such as fragmentation, logging, fire, plantation, grazing, invasive species and especially to fast climate changes.
The reconstruction of past vegetation by palaeocological data, including biogeography, climate change and human impact provides important information for the understanding of ecosystem dynamics and future environment interactions in tropical ecosystems. Therefore, the main goal of this project is to reconstruct the past vegetation of Upper Montane Araucaria Forest and High Elevation Grasslands and the interactions between vegetation, climate and human activities, enabling the comprehension of these ecosystems dynamics and producing reliable information for planning strategies actions for conservation the ecosystems and their biodiversity.

The steps of the research are:


Because of the complexity of tropical ecosystems and differences on the sedimentary process, it is quite important to collect cores from multiple sites, identifying the dynamics and vegetation responses under different conditions.
Therefore, three sites were selected for studying:


Locations of the study sites: 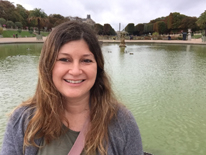