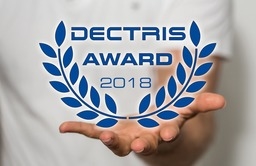 Markus Osterhoff, Institute for X-ray Physics, has been announced the first winner of the Dectris Award for innovative researchers. The swiss company, which is strongly connected to large scale research facilities, builds pixelated single-photon counting X-ray detectors that are e.g. used by the groups of Prof. Sarah Köster and Prof. Tim Salditt for quantitative X-ray iamging of biological specimens. In the method of scanning nano-SAXS, they combine highly focused X-ray beams with diffractive imaging, yielding both real-space resolutions of below 100 nm and reciprocal-space structural information on the few nm level.

This scanning technique requires to cope with data rates of up to a few Gigabytes per second. Markus Osterhoff has designed, programmed, and commissioned a dedicated data analysis system called the ``Heinzelmännchen cluster''. Only the essential components of 24 consumer-grade computers are working in parallel, with a central controller PC acting as job and data distributor. The committee summaries his work as enabling advanced, high throughput data mining and hence facilitating the full exploitation of the potential of new sources and new detectors.” Osterhoff adds, that “now we can process more than 14 billion pixels per second; that allows us to extract quantitative images from one million diffraction patterns, each composed of four million pixels, within five minutes.”

Read one on Dectris.com
article in the Göttinger Tageblatt (in German)

Data mining is one of the main themes of the future, and this is especially true in science: high-speed detectors produce large amounts of data that we have to cope with. For the X-ray imaging technique of scanning nano-SAXS, Markus Osterhoff at the Institute for X-ray Physics has designed, programmed, and commissioned a dedicated data analysis cluster. For this work, he was announced the first winner of the Dectris Award for Innovative Researchers. 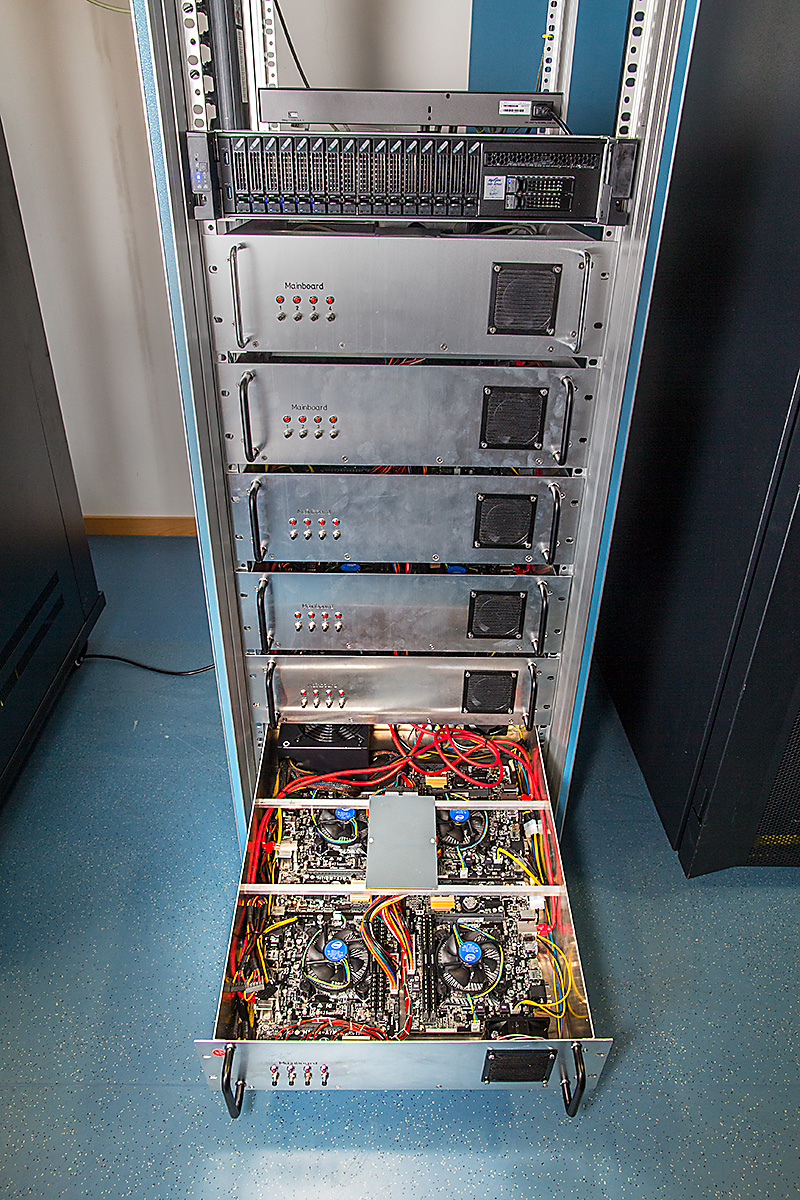 The committee agreed that ”Osterhoff's work is enabling advanced, high throughput data mining and hence facilitating the full exploitation of the potential of new sources and new detectors.” The teams of Prof. Dr. Sarah Köster and Prof. Dr. Tim Salditt from the Institute for X-ray Physics use the brilliant X-ray beams produced at large scale research facilities like the European Synchrotron Radiation Facility (ESRF) in Grenoble, France, and the PETRA III synchrotron at DESY, Hamburg, to look deeply into biological specimens. Their study spans many length scales from tissue over single cells down to protein networks.

In scanning nano-SAXS, the X-ray beam is focused to spot sizes of about 100 nm or smaller, providing a spatial resolution better than light microscopy. But in addition, single-photon counting pixel detectors like the Dectris EigerX collect scattering patterns that hold structural information in reciprocal space, with resolutions on the few-nm level. Combining spatial and reciprocal information, the research groups can now detect e.g. actin networks in eukaryotic cells. The structures found with X-rays are then correlated to fluorescence microscopy images, where specific proteins, and hence functions, are labelled.

“Using scanning nano-diffraction, we bridge two worlds of X-ray imaging: A highly focused beam is used to resolve the different constituents inside biological cells. From the diffraction patterns we get at each position, we can extract structural information on molecular length scales”, Markus Osterhoff from Göttingen explains the experimental method. The sample is raster-scanned and studied at millions of different positions; at each point in space, the EigerX detector by Dectris produces an “image” with four million pixels. This can now be done with 750 Hz, leading to data rates of more than six Gigabytes per second that have to be analysed. 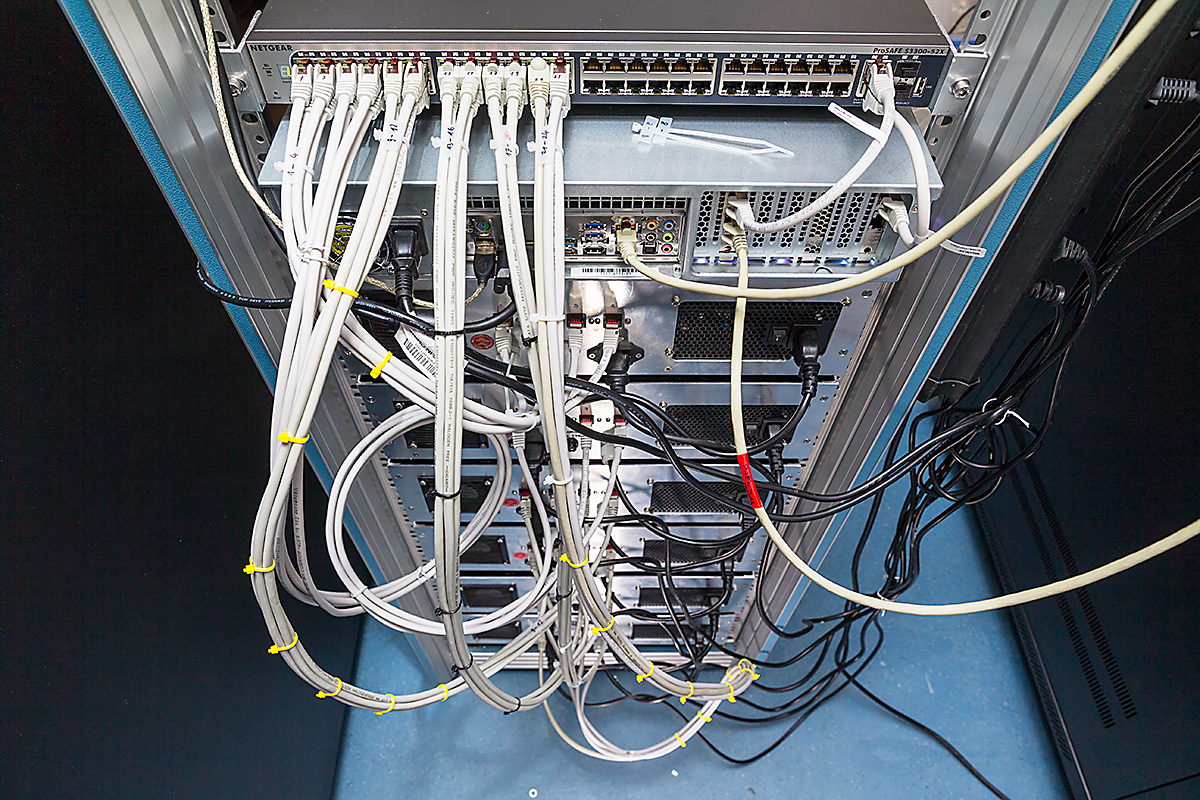 
The group of Tim Salditt develops new X-ray based imaging methods. In nano-SAXS experiments, the group extracts physical parameters from the diffraction data. Ultimately, each of the four megapixel diffraction pattern is converted into a single number or a vector of low dimensionality. ”The millions of diffraction patterns then form a quantitative image of the specimen”, explains Tim Salditt.

The processing power needed for this imaging technique could not be met with existing hardware the group is using for X-ray tomography. As it turned out, the actual calculation is very fast, but the amount of data becomes too large for one many-core parallel computer. Instead, the team acquired 24 consumer-grade computers, which are now working in parallel. To cut down costs and reduce the required space, the computers only consist of essential hardware: mainboard, processor and memory; four nodes share one power supply. ”A control PC distributes the work and data streams to the computing nodes; now we have 24 `Heinzelmännchen' working on our EigerX datasets, and in principle we could cope in real-time with four EigerX detectors running in parallel at full speed”, Markus Osterhoff is proud of their achievement. More than 14 billion pixels can be processed per second.

For the development of the parallel analysis software and computing infrastructure, Markus Osterhoff was decorated with the first Dectris Award, endowed with a prize money of 1000 CHF. 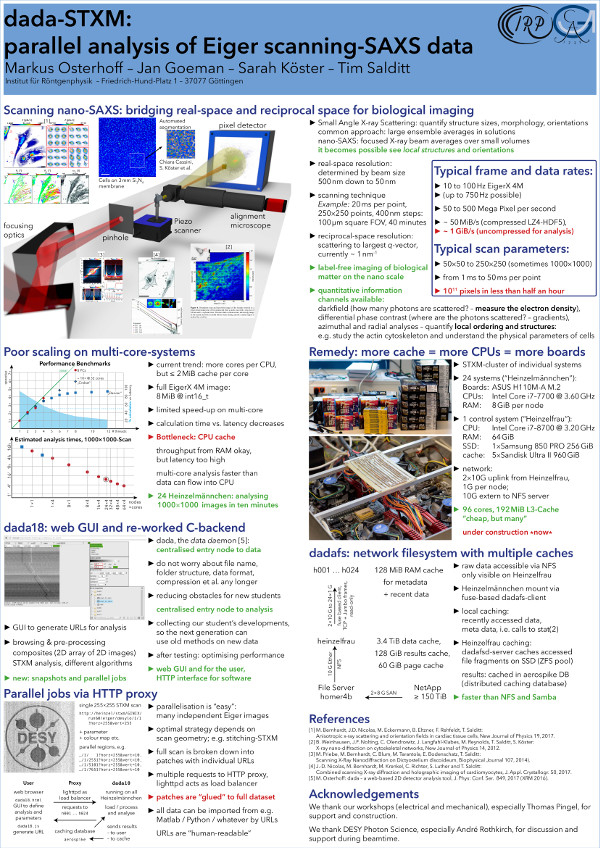 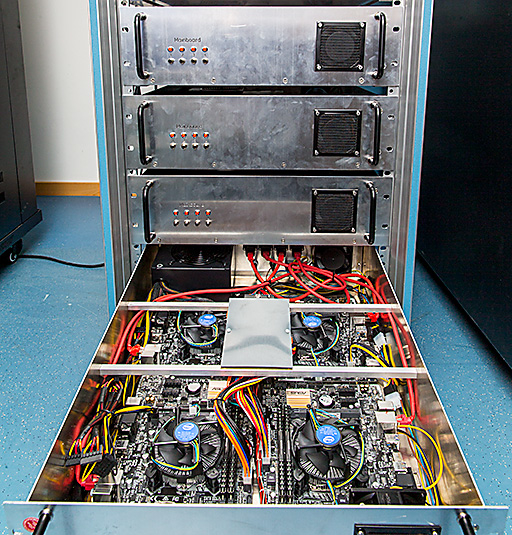 A closeup of one Heinzelmännchen 19" rack drawer, used as a dedicated cluster for X-ray scanning nano-SAXS data analysis. Using modern EigerX 4M detectors by Dectris, hundreds of Gigabytes of data can be collected at Synchrotron Radiation Sources within a few minutes; a parallel anaylsis of such large datasets depends on fast analysis hardware and flexible software, as is currently developed by Markus Osterhoff at the Institute for X-Ray Physics, Uni Göttingen.