Cynthia Volkert is a Professor at the Institute of Materials Physics at the University of Göttingen, starting in October of 2007. Her research has focused on microstructure and mechanical properties studies of small structures and on the use of focused ion beam systems for characterization and nanostructuring. She received a Bachelors degree in physics from McGill University in 1982, and a PhD degree from Harvard University in 1988 where she worked on structural relaxation and flow in metallic glasses. She then spent 10 years as a staff member at Bell Laboratories in New Jersey, where her research included various experimental and theoretical aspects of the effects of ion irradiation on solids, strain relaxation in heteroepitaxial films, stress effects on optical properties of glasses, phase changes on very short time scales, mechanical properties of thin metal films, and electromigration. In 1999, she moved to the Max Planck Institute for Metals Research in Stuttgart to work on microstructure and electromigration in thin films. Then she moved in 2002 to Forschungszentrum Karlsruhe where she developed micro-mechanical methods to perform ex-situ and in-situ investigations of deformation and dislocation dynamics in small dimensions. Volkert has served on several review and advisory panels, including boards at the National Research Council, Sematech, Department of Energy, and the German Research Foundation. She is currently Vice-President of the Materials Research Society and serves on the Board of Directors. 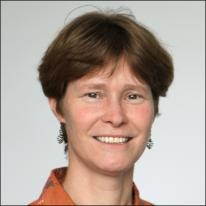