AvH grants 55000 EUR for institutional partnership with Ukraine, initiated by Prof. Thomas Mann, the Head of public law at Faculty of Law of Georg-August-University Göttingen

Professor Mann and his Ukrainian colleague Prof. Dr. Roman Melnyk from Kiev have been awarded a grant of 55,000 EUR from the Alexander von Humboldt Foundation. The three-year project is part of the AvH-alumni programme and is intended to build long-term academic partnerships between the institutions. This grant supports new research collaborations between the law faculties of the Georg-August-University and the Taras Tschewtschenko University in Kiev, where the kick-off meeting for the sponsored project was held in autumn 2017. For the trip to Kiev, Prof. Mann, Head of the Institute of public law in Göttingen, was accompanied by the professoral candidate Dr. Sina Fontana and Ph.D. student Dag M. Bellroth. One of the key elements of this project is to actively involve doctoral students and post docs from both countries in all aspects of the project.
The main focus for the collaboration is “the functional conditions of judiciary in Germany and Ukraine” including judicial independence, the methodological competence of judges, transparency in administrative decision-making processes, public supervision of the administration, and an independent judiciary. The funding may be used to support holding conferences, workshops, and reciprocal research visits lasting up to three months, as well as consumables, printing costs, academic auxiliary staff, and equipment for the Institute.
Both researchers bring extensive professional experience to the collaboration. Prof. Mann spent ten years as a administrative judge at Niedersächsisches OVG, and AvH-alumni-fellow Professor Melnyk worked on general administrative law, police law and right of assembly during several long-term research stays at German Universities since 2014, particularly at the Institute of administrative law of Prof. Mann. Prof. Melnyk also successfully established the “Zentrum für Deutsches Recht” (ZDR) at his University (http://zdr.knu.ua/de/); Professor Mann provided consultation, mentoring, and logistical support for the ZDR, and his colleagues (e.g. Prof. Spindler, Prof. Krause, Prof. Deinert) donated books.
Professor Mann and Professor Melnyk have also established an online-journal, REOS, (www.reos.uni-goettingen.de) which stemmed from earlier seminars and conferences held in the Ukraine (Kiev) and Germany (Göttingen), efforts that were supported by DAAD and BMBF. They have also jointly written numerous publications, specialist legal articles and papers, textbooks and reference books. 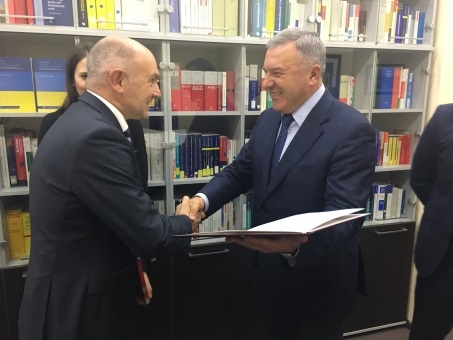