Interaction of ectomycorrhiza and beech along a land use gradient

Beech (Fagus sylvatica L.) roots are colonized by ectomycorrhizal fungi (EMF) which are considered to play an important role in plant N supply. However, the importance of EMF diversity for host N uptake is not well understood. To study the relationship between EMF diversity and beech nutrition, experiments are conducted under greenhouse and field conditions.
The objectives of this PhD study are: to investigate ectomycorrhizal diversity associated with roots of beech progenies; to assess the performance and N uptake of beech progenies; and to understand the molecular mechanism of beech-EMF interaction for function of beech nitrogen supply.
To address these questions, we set up a greenhouse experiment, in which we manipulated the diversity of the EMF community of the host plants and studied N uptake of beech by 15N labelling. To investigate the molecular mechanisms underlying the variation in N uptake, field studies in the framework of the Biodiversity Exploratories (www.biodiversity-exploratories.de) using the Beech transplantation experiment are conducted. Differentially expressed genes will be identified and their expression will be tested along the experimental plots of the Biodiversity Exploratories. 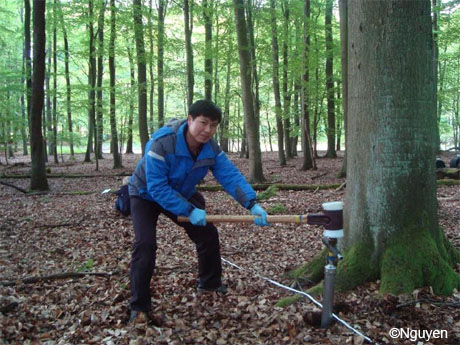 The work has been funded partly by the DFG Priority Program 1374 "Infrastructure-Biodiversity-Exploratories" (DFG-PO362/18-3) and by a scholarship awarded by Ministry of Agriculture and Rural Development of Viet Nam (MARD). 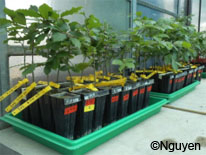 Interaction of ectomycorrhiza and beech along a land use gradient