Cornelia Nuxoll: Current research in the context of the research group "Music, Conflict and the State"

My current research for the group deals with the role of music in the life of (former) child soldiers in the so-called new wars.
I am interested in the interaction of music and conflict, of music in conflict, thus, assessing the place, power and relevance of music in times of crisis and war.

Particular regional focus is placed on the ended civil wars of Sierra Leone in West Africa. Another focal point is in what way music is a meaningful medium of inspiration and means of authority and revolution for warring factions.

A recently conducted field research explored political and military songs composed by the different fighting factions, popular songs by local artists that were critical of the war, but it particularly focused on the impact, role and incorporation of reggae but also of rap music among recruited children and adolescents during the conflict. 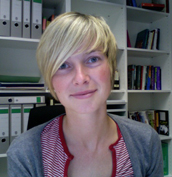