Elisabetta Abate obtained a PhD in Oriental Studies in 2009 from the Ca’ Foscari University of Venice, with a study on the treatises Yevamot (dealing mainly with levirate marriage) and Sotah (dealing mainly with the trial of a suspected adulteress) of the Mishnah (ca. 200 C.E., probably the earliest written document of Rabbinic Literature, and the collection of traditions the Talmuds are built on).

In 2003 she graduated from Ca’ Foscari University with a commented translation from Mishnaic Hebrew into Italian of the treatises Ta‘anit, Megillah, Mo’ed Katan and Hagigah of the Mishnah.

In 2009/10 Elisabetta Abate was one of twenty-four Walter Benjamin fellows from sixteen countries at Paideia – The European Institute for Jewish Studies in Sweden, a non-denominational academic framework whose aim is to promote the renewal of Jewish culture in Europe by educating academicians, artists and Jewish community leaders in Jewish literacy.

With a deep motivation, Elisabetta Abate practices the Feldenkrais Method® of somatic and sensorial learning. Based on the research conducted by Dr Moshe Feldenkrais over decades, its purpose is to enhance students’ somatic self-awareness as a means for them to uncover their own human potential, and to find ways of moving optimally, of creating strategies for self-care, flexibility, and strength. Elisabetta Abate’s creativity and self-organization are among the areas that display the greatest benefits, and that influence her professional growth.

Her previous education centred mainly on Natural Sciences, though it also included the study of Latin classical antiquity.

Elisabetta Abate joined the Junior Research Group “Piety and Paideia” at EDRIS in May 2010. 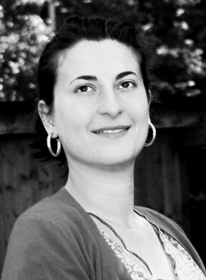