Indonesia has experienced a substantial decline in forested land between 1990 and 2005, ranking second in terms of the absolute loss of area and fourth in the relative term, in comparison to other countries (World Trade Organization 2010). At the beginning, logging was the main cause for the reduction of forested land but has been substituted by the growth of rubber and palm oil plantations. Latter has also impacted the Province of Jambi, where our research is located. Playing a major role in the smallholder production the general goal of our research is to analyze the main transformation system for oil palm and rubber to reveal the possibilities it could contribute to poverty alleviation while considering eventual downside byproducts as threats to biodiversity conservation and land sustainability (Belcher & Schreckenberg 2007).

In the Province of Jambi the smallholder participation appears in various institutional settings. Close integrated systems with large companies, exists as well as independent settings on unregulated basis. At the most disaggregated economic scale, the productive efficiency of smallholder households engaged in palm oil and rubber production determines the competitive position of smallholders versus large scale commercial enterprises. The measurement of productive efficiency in perennial crops has received scant attention in the existing literature. Concepts for dynamic efficiency measurement have been proposed, albeit with no reference to the case of perennial crops (Stefanou, 2009) necessitating an extension of the framework for perennial crops in Jambi, in particular for the inclusion of environmentally important inputs and outputs.

Data for the calculations is provided in two steps. First, production and household data is taken from the detailed household survey of project C07. And second, one third of the farmers engaged in the household survey is additionally revised by a second survey taking indices on environmental outputs as biodiversity levels, soil composition and biomass indicators on household level. The second data collection takes place in the farmer’s surveyed plantation allowing the connection of the two data sets and combination of both outputs in the directional distance function.

The timeframe of this survey is set from mid of September to the end of the year 2012, covering around 40 villages in five regencies of Jambi (Sarolangun, Bungo, Tebo, Batanghari, Mauro Jambi). 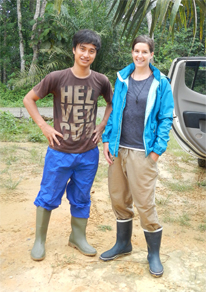