The regional climate model RegCM4 is used to study the impact of land use change on the variability and change of atmospheric and surface parameters. The land use change data of year 2000 and 2010 is used as the boundary condition of model. We perform two simulations to show the impact of different land use of these two periods. The first simulation is using the atmosphere initial condition of the year 2010 with land use of year 2010 to represent the current condition. The second one is using the same initial condition as the 1st simulation but using the land use of 2000. We assume that the differences of the atmospheric and surface parameters are due to the impact of land use change. The comparison results of the atmospheric component and surface parameters i.e. soil water and soil temperature will proove the impact of such different land use changes. The extensive deforestation over time causing more open areas as in the land use of 2010 lead to more radiation absorbed by surface and could change the long wave radiation and heated the surface. These could be reveal that the increasing of the soil temperature and the decreasing of the soil water content caused by the extensive land use of 2010. We also will compare the output of model with observed climate data to validate the performance of model. 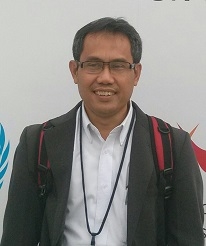