The City of Göttingen

Göttingen is situated in the southernmost part of Lower Saxony in the geographical centre of Germany, between the Harz Mountains and the Weser River.
The city dates back to the Middle Ages and still boasts a historical quarter with excellently preserved half-timbered houses. While the architecture breathes history, the spirit of Göttingen is young and vibrant thanks to its 28,000 students, more than eleven per cent of them with an international background.

Göttingen - the city of knowledge
In addition to the University, Göttingen also hosts five Max Planck Institutes and a number of other important scientific institutions, such as the German Primate Center and the German Aerospace Center.
The local economy includes many innovative technology-oriented enterprises in the sectors of measurement and control engineering, biotechnology, optics, medical technology and information technology. Several companies are spin-offs from university research projects.

Moving around
Finding your way around town is very easy as the centre is compact and distances from one end to the other are pretty short. The university departments and buildings are dispersed at various campuses around the city and are within easy walking or cycling distance from each other.
As you will notice very soon, almost everyone in Göttingen seems to own a bike. It is certainly the cheapest, most convenient and an environmentally friendly way of transportation. An alternative would be to use the bus - students can do so on a free of charge basis, having their university card.

Going out
Göttingen offers a myriad of possibilities for recreational activities. The town has three theatres, a symphony orchestra, several cinemas, cafés and pubs, which provide numerous opportunities to meet people and have a good time. Popular annual events include the Night of Culture, the International Händel Festival, the Jazz Festival, the International Literature Festival and many more. The university and its student union sponsor many cultural and recreational events.

Surroundings
Due to its central position in Germany, Göttingen has excellent traffic connections. It is close to the major North-South motorway, and there are high-speed train ICE (Inter-City Express) connections from the main train stations. Within 30 minutes, you can be in Kassel or Hanover and in Berlin, Hamburg or Frankfurt within two hours.
But you don't have to go that far to take a break! Göttingen is surrounded by beautiful countryside, with its rolling hills, huge forests, and the Harz: the highest mountain range in Northern Germany. There are also a number of smaller towns that are worth a visit and can be seen on a day trip from Göttingen. The semester ticket allows students to use Lower Saxony regional trains for free.

These are a few examples of the places which you can reach within 2 hours, using local trains: 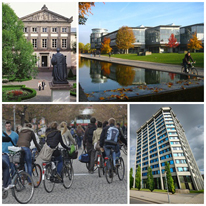