History of the Institute

The Institute of Numerical and Applied Mathematics was founded by the mathematical-natural scientific faculty. In the winter term 1969/70 trainees were taken on so that they could carry out a mission; to strengthen the use of applied mathematics. The professors of the institute represent numerical mathematics, physic mathematics, and informatics as a part of the applied mathematics in research and teaching. Their course offerings are designed especially for students who would like to work in natural scientific computer centers, development departments, banks, Insurance companies or in the industrie after they complete their degrees. 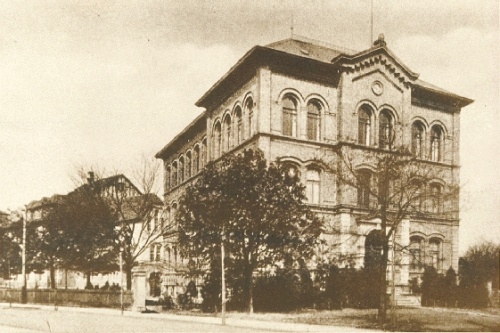 Ther historical Building of the Institute.

Prof. Dr. B. Brosowski was called to be the Institutes first and newly appointed chairman. He was responsible for overlooking and running the assembly of the Institute. Through his efforts the Informatics Department in particular received a first-rate Hardware equipped for beginners and room setup (Machine room, operating room, puncher room, counseling office).In todays day you can get a much more accurate vision than in the past and therefore it is vital to stress the importance of Informatics for the scientific work in this Institute.

In 1971 the Informatics Department consisted of only one programmer, two operators, and a course programming assistant and because at this time there was not a personal computer available at the Institute, the Operators were responsible for driving up to eight Kilometers to the computer center GWDG (Gesellschaft für wissenschaftliche Datenverarbeitung mbH Göttingen), so that they could allow the program to calculate the holes in their punch cards.

In 1971 the Institute delegated a second chairman. Both the chairmen, Prof. B. Brosowski and Prof. R. Kreß were driven from the very beginning by the idea of a full-time Informatics department. However the Senate of the University Goettingen decided against this implementation in the Winter Semester of 1972/73. Since the Winter Semester 1984/1985 Informatics was available though to be studied as a minor or elective. In 1972 the Institute moved into today's buildings.

Beginning in Spring 1973 the Institute installed its own Computer, a PDP-15 with periphery ( Teletype, card reader, punch card reader, punch press, rolling printer, and Modem). This computer was connected by a mainframe telephone leased line GWDG, a UNIVAC 1108. With this capability, the calculations and driving responsibility would now be carried out by three operators. 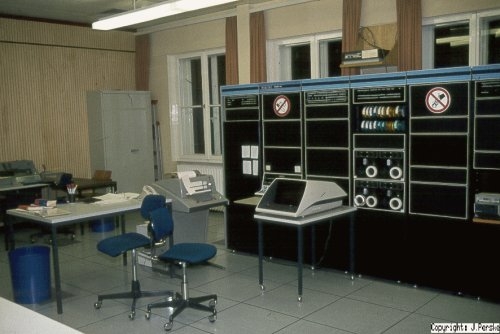 The first equipment from year 1973: a PDP-15 (a black case) . In this room you will find todays scientific working spot (PCs).

The PDP-15 was replaced in the year 1980 with the famous VAX 11/780. This purchase made it possible for the Institutes workers and students programs for the instiute to be calculated within their own workstations. In 1987 the VAX 11/780 was implemented throughout many more workstations.

The library was built from the ground up and was managed by assistants until the year 1973 when a librarian took over. After one year there was about 1,500 books available and today, half way through 1999, we have reached about 14,500 books.

P.S. On the second of September 2000 the Senate ordered that the center for Informatics be established and since then, Winter Semester 2000, you can study Informatics as a major at the University Gottingen. 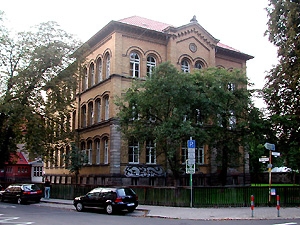