Christianity is a “thinking religion”, and it is not by chance that from the very beginning Greek notions like Truth, Freedom, Word (Logos), Spirit, Love (Agape) became so important in the New Testament and released the need for an intellectual self-assurance of belief (theology).

God induces to thinking. But the singular occurrence in the history of religions, which made that the thought of God and the historical man Jesus of Nazareth be insolubly bound in Christianity, challenged thinking efforts of highest level. The dogmas of the Early Church, the vast teaching systems of the Middle Ages (scholasticism), the protestant orthodoxy and the changes within philosophy of religions in modern times (Kant, Fichte, Schelling, Hegel) – they were all possible due to this occurrence. One has to mention only the name of Augustine in order to underline the significance of the history of Christian thinking for Europe and for western thinking, including ethics.

The objective of the lecture series was to introduce classical thinkers with great impact and various imprints – both theological and philosophical – who strived to reflectively understand the Christian religion, that is to openly account for it; because thinking is a collaborative matter. Therefore not only theologians were invited, but also philosophers.

The lectures focused thereby upon the modern times (19th and 20th centuries).

We presume that it was revealing and provocative for the audience to be able to witness how Christianity brought forth a history of thinking, through which the belief grew self-assured conceptually always and anew. The topic of this series has preserved thereby its significance until nowadays. 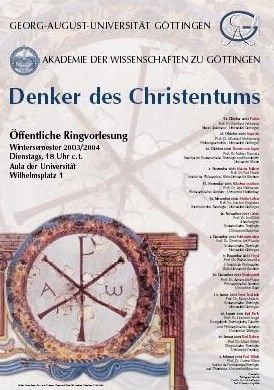