Pleistocene and holocene environmental changes in a brazilian area of Amazonia

Amazonia holds the largest rainforest ecosystem on earth and plays a significant role in global climate, hydrology, carbon cycle, and biodiversity. Despite the importance of the Amazon rainforest to modern and future global environmental change relatively little is known about its past. In this project, late Quaternary environmental dynamics will be investigated using lake and swamp sediment cores from different regions north and south of the equator in Amazonia.
Multiproxy studies by innovative temporal high resolution pollen, charcoal, isotope and sediment analysis, radiocarbon dating and multivariate data analysis will be applied.
Of special interest is the reconstruction of late Pleistocene and Holocene environmental changes from different regions in Amazonia in particular

We want to study the temporal development of regional climate change, its driving forces as well as the response time of vegetation change on variations in precipitation and seasonality. Understanding past environmental change and the ecological response will provide important contribution to the Climate Change thematic. 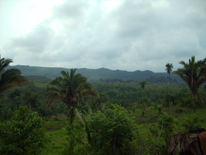