Description: We investigate the hopping dynamics of a colloidal particle across a potential barrier and withina viscoelastic, i.e., non Markovian bath, and report two clearly separated time scales in the corresponding waiting time distributions. While the longer time scale exponentially depends on the barrier height, the shorter one is similar to the relaxation time of the fluid. This short time scale is a signature of the storage and release of elastic energy inside the bath, that strongly increases the hopping rate. Our results are in excellent agreement with numerical simulations of a simple Maxwell model. (link) 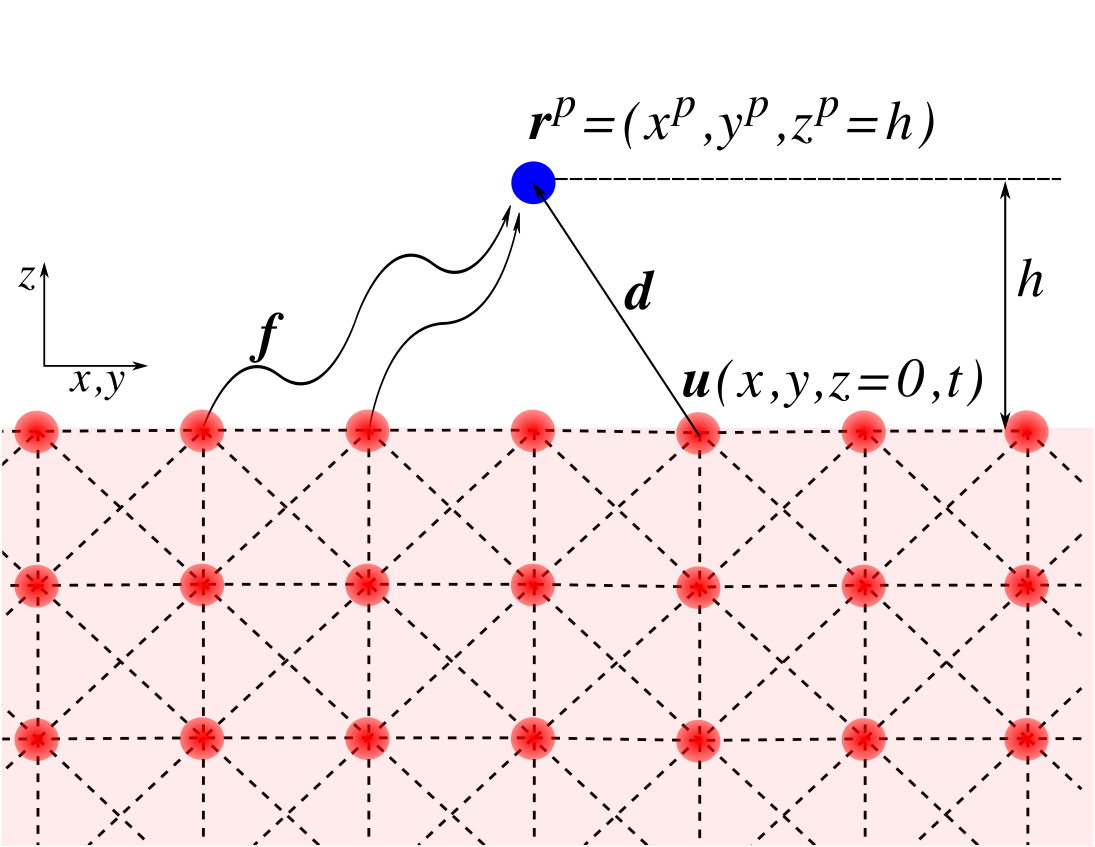 Description: While obtaining theoretical predictions for dissipation during sliding motion is a difficult task, one regime that allows for analytical results is the so-called noncontact regime, where a probe is weakly interacting with the surface over which it moves. Studying this regime for a model crystal, we extend previously obtained analytical results and confirm them quantitatively via particle based computer simulations. Accessing the subtle regime of weak coupling in simulations is possible via use of Green-Kubo relations. The analysis allows to extract and compare the two paradigmatic mechanisms that have been found to lead to dissipation: phonon radiation, prevailing even in a purely elastic solid, and phonon damping, e.g., caused by viscous motion of crystal atoms. While phonon radiation is dominant at large probe-surface distances, phonon damping dominates at small distances. Phonon radiation is furthermore a pairwise additive phenomenon so that the dissipation due to interaction with different parts (areas) of the surface adds up. This additive scaling results from a general one-to-one mapping between the mean probe-surface force and the friction due to phonon radiation, irrespective of the nature of the underlying pair interaction. In contrast, phonon damping is strongly non-additive, and no such general relation exists. We show that for certain cases, the dissipation can even decrease with increasing surface area the probe interacts with. The above properties, which are rooted in the spatial correlations of surface fluctuations, are expected to have important consequences when interpreting experimental measurements, as well as scaling with system size. (link) 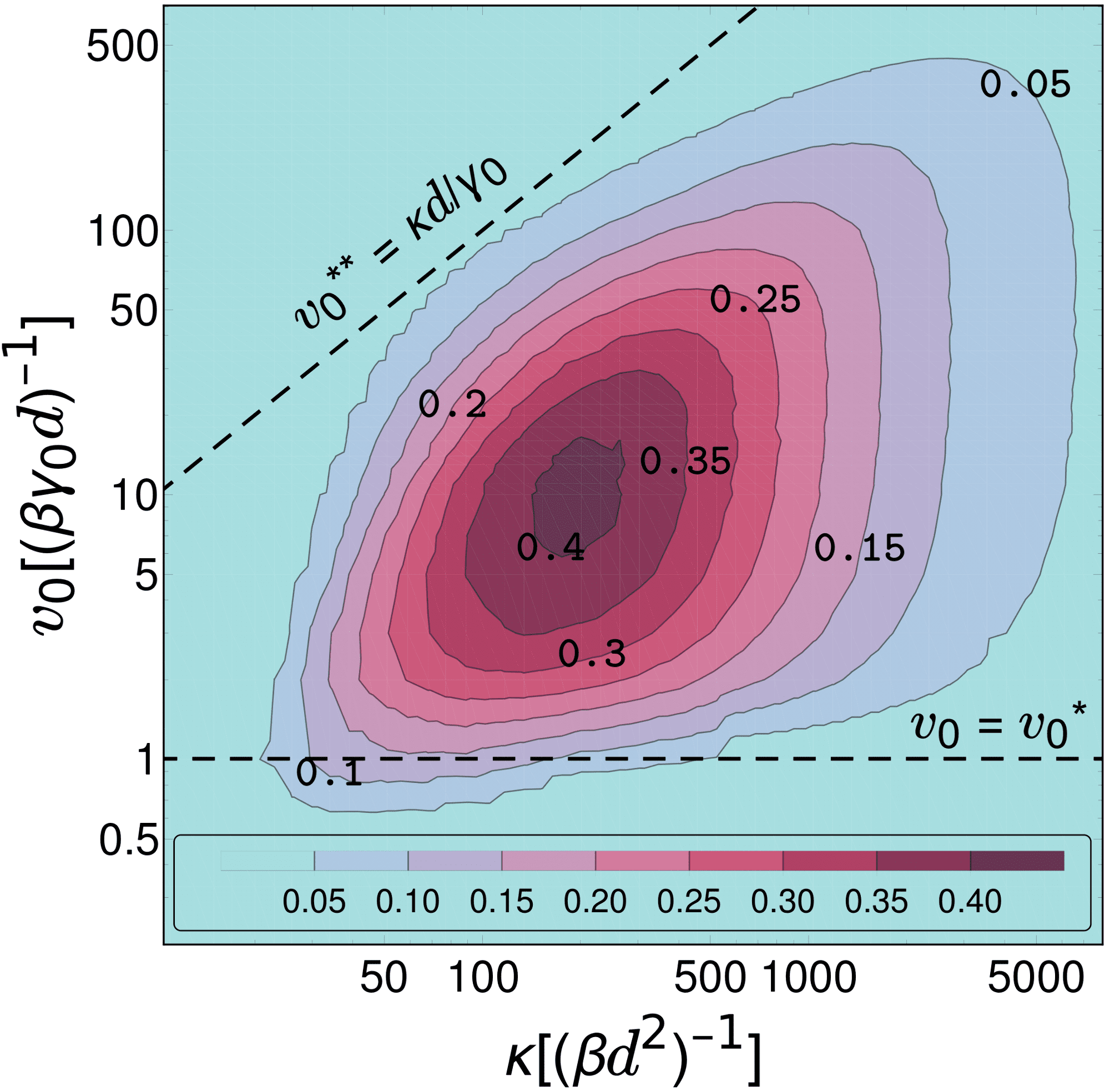 Description: The motion of Brownian particles in nonlinear baths, such as, e.g., viscoelastic fluids, is of great interest. We theoretically study a simple model for such bath, where two particles are coupled via a sinusoidal potential. This model, which is an extension of the famous Prandtl Tomlinson model, has been found to reproduce some aspects of recent experiments, such as shear-thinning and position oscillations [J. Chem. Phys. 154, 184904 (2021)]. Analyzing this model in detail, we show that the predicted behavior of position oscillations agrees qualitatively with experimentally observed trends; (i) oscillations appear only in a certain regime of velocity and trap stiffness of the confining potential, and (ii), the amplitude and frequency of oscillations increase with driving velocity, the latter in a linear fashion. Increasing the potential barrier height of the model yields a rupture transition as a function of driving velocity, where the system abruptly changes from a mildly driven state to a strongly driven state. The frequency of oscillations scales as (v0-v0∗)1=2 near the rupture velocity v0∗, found for infinite trap stiffness. Investigating the (micro-)viscosity for different parameter ranges, we note that position oscillations leave their signature by an additional (mild) plateau in the flow curves, suggesting that oscillations influence the micro-viscosity. For a time-modulated driving, the mean friction force of the driven particle shows a pronounced resonance behavior, i.e, it changes strongly as a function of driving frequency. The model has two known limits: For infinite trap stiffness, it can be mapped to diffusion in a tilted periodic potential. For infinite bath friction, the original Prandtl Tomlinson model is recovered. We find that the flow curve of the model (roughly) crosses over between these two limiting cases. (link) 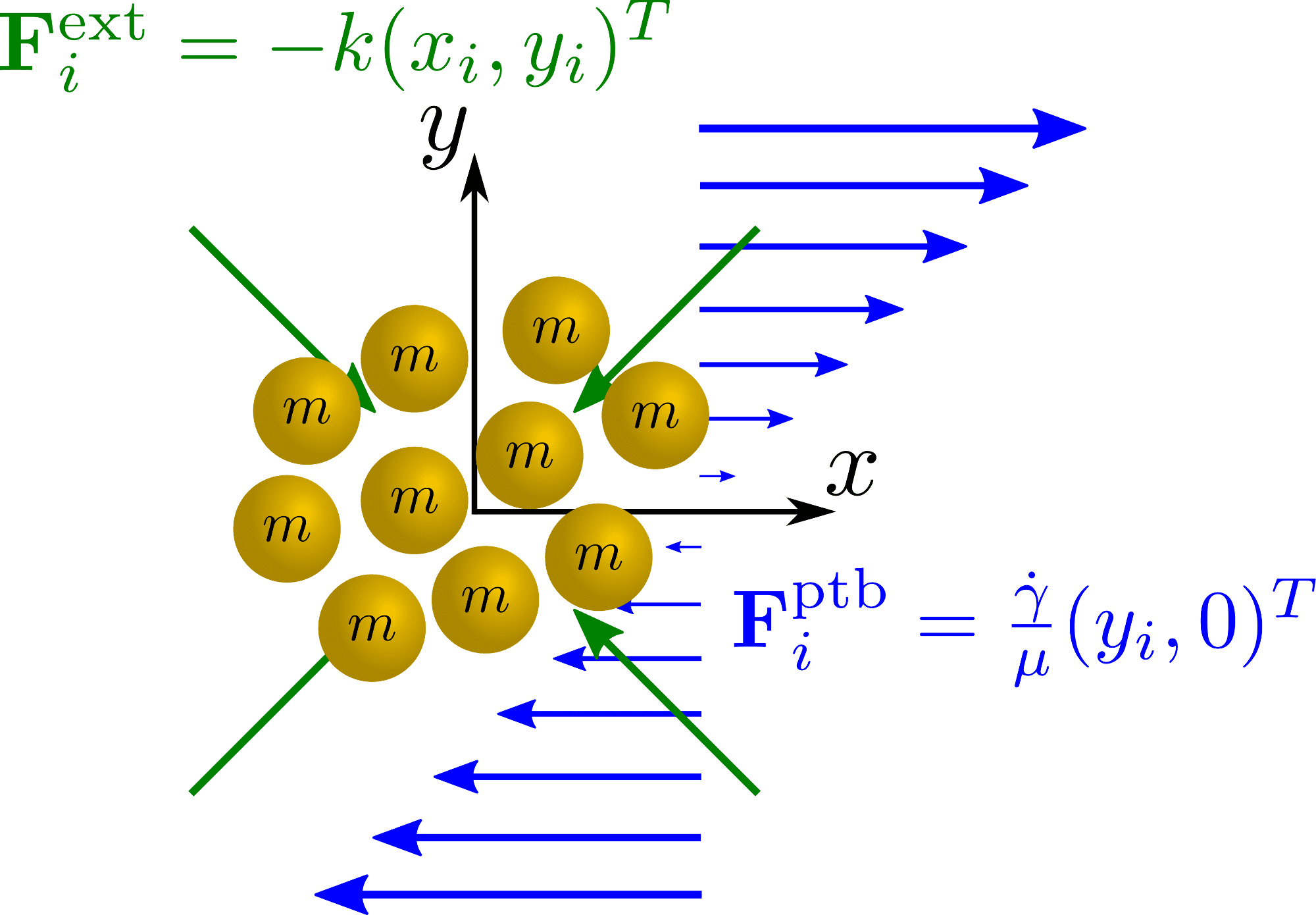 Description: We present a comprehensive study of the linear response of interacting underdamped Brownian particles to simple shear flow. We collect six different routes for computing the response, two of which are based on the symmetry of the considered system and observable with respect to the shear axes. We include the extension of the Green-Kubo relation to underdamped cases, which shows two unexpected additional terms. These six computational methods are applied to investigate the relaxation of the response towards the steady state for different observables, where interesting effects due to interactions and a finite particle mass are observed. Moreover, we compare the different response relations in terms of their statistical efficiency, identifying their relative demand on experimental measurement time or computational resources in computer simulations. Finally, several measures of breakdown of linear response theory for larger shear rates are discussed. (link)

Description: We perform micro-rheological experiments with a colloidal bead driven through a viscoelastic worm-like micellar fluid and observe two distinctive shear thinning regimes, each of them displaying a Newtonian-like plateau. The shear thinning behavior at larger velocities is in qualitative agreement with macroscopic rheological experiments. The second process, observed at Weissenberg numbers as small as a few percent, appears to have no analog in macro rheological findings. A simple model introduced earlier captures the observed behavior, and implies that the two shear thinning processes correspond to two different length scales in the fluid. This model also reproduces oscillations which have been observed in this system previously. While the system under macro-shear seems to be near equilibrium for shear rates in the regime of the intermediate Newtonian-like plateau, the one under micro-shear is thus still far from it. The analysis suggests the existence of a length scale of a few micrometres, the nature of which remains elusive. (link)

Description: The fluctuation-dissipation-theorem connects equilibrium to mildly (linearly) perturbed situations in a thermodynamic manner: It involves the observable of interest and the entropy production caused by the perturbation. We derive a relation which connects responses of arbitrary order in perturbation strength to correlations of entropy production of lower order, thereby extending the fluctuation-dissipation-theorem to cases far from equilibrium in a thermodynamic way. The relation is validated and studied for a 4-state-model. (link) 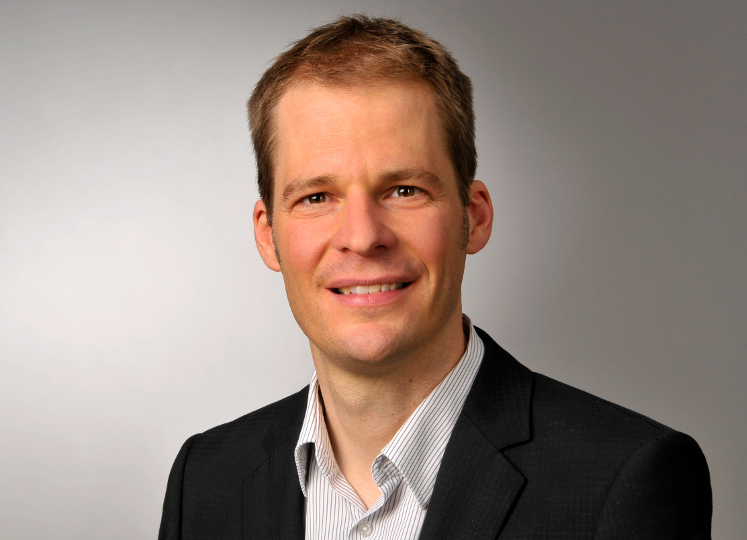