The research foci of the group cover a wide range of ecological areas. Below given are 9 focus areas that are recently covered by research projects. For each focus area a pdf file containing a poster in English language can be downloaded.

3) Ecology and biodiversity of tropical forests

8) Biodiversity loss in the agricultural landscape

The experimental and demonstration project F.R.A.N.Z. develops concepts of promoting agrobiodiversity on 10 conventional farms in Germany by finding compromises between the goal to maintain high agricultural yield and to establish various types of ecological focus areas (EFAs) on 5-10 percent of the farmland area. The measures to increase biodiversity are proposed by scientists and are implemented together with the farmers. The success of biodiversity promotion is measured in the EFAs by comparison with a control and the BACI (before-after-control-impact) approach. The economic success of the farms is also recorded.

In a participative project with farmers in the counties of Diepholz and Nienburg (Lower Saxony), efficient measures to promote biodiversity are tested under field conditions in intensively used farmland (arable). The success of the measures is studied by monitoring a large number of plots in which plant and bird diversity is registered.

DIVforCLIM – Widening the spectrum of timber trees to be used in production forests under climate change: The drought tolerance of minor timber species

Forestry in Germany relies at the moment on a very small number of timber trees. Several species may be vulnerable under a future drier and warmer climate. This project investigates the drought tolerance of four minor timber species (Fraxinus excelsior, Tilia cordata, Acer platanoides, Carpinus betulus) by studying mature stands along a precipitation gradient in northern Germany and measuring the climate sensitivity of radial growth, xylem vulnerability to cavitation, the live/dead ratio of fine root mass, and long-term growth trends. The data are related to precipitation and soil moisture and used to assess the drought sensitivity of the four species.

BEECHLIMITS – Risks of Beech Forest Management in a Changing Climate: Recent Growth Trends of Beech in Northern Germany and Identification of a Hydrologically-Defined Limit for Beech Cultivation

European beech has been found to be sensitive to summer drought and high summer temperatures. However, a drought limit beyond which beech loses its vitality is not yet identified. Such information is urgently required for forest management in particular in the lowlands of Germany. This project investigates 40 beech forests along a precipitation gradient from northwestern to northeastern Germany mostly on Pleistocene substrates. We investigate wood cores for long-term growth trends and climate sensitivity of radial increment, measure xylem vulnerability to embolism in sun canopy twigs and assess the soil hydrological regimes at the sites in order to define a hydrological threshold for mature beech beyond which beech shows declining vitality and long-term decrease in wood production. Both precipitation amount and stored soil moisture will be considered as constraining factors.

Even though species-rich tropical old-growth forests are rapidly replaced by agroforestry systems with low species number, it is not known so far as to whether the loss of functional diversity and in species-specific hydraulic strategies has negative effects on the resilience of the systems when exposed to seasonal or episodic droughts. In order to assess the resilience of different tropical land use systems to climate variability, a direct comparison of the hydraulic safety margins (HSM) of plant communities with presence of different hydraulic strategies is needed. These strategies include the mutual inter-relationship between growth performance, water consumption, wood anatomy, cavitation resistance of the branch wood, leaf-related water status traits, and the sensitivity of stomatal water loss control (iso- vs. anisohydric strategy), the latter being partly reflected in the foliar isotope signatures of C and O. By measuring these processes and state factors of growth and water consumption control in mature trees across different land-use systems (natural forest – rubber plantation – oil palm plantation), and within each system at topographically different sites, this study examines whether the diversity loss in hydraulic strategies from the species-rich natural forest to a monoculture results in lower resistance to, and resilience upon, inter-annual climate variation in intensively used tropical landscapes.

During the first phase of the CRC, we focused on the carbon cycle and sequestration across four different land-use systems in order to link altered patterns in tree species diversity, identity, and forest structure to ecosystem functioning. These measurements will be continued in the 2nd phase in order to monitor not only the spatial, but additionally the temporal (inter-annual), variability of aboveground C sequestration. Based on a record of 7 years of productivity measurement (in 2019), we will quantify the inter-annual variation in productivity in the different systems and relate the variation to the diversity of hydraulic strategies being present. In search for complementarity in the hydraulic strategies of co-occurring rainforest trees, we will study 24 tree species (plus rubber and oil palm) in detail, which represent gradients in wood density, height at maturity and growth performance. Key parameters measured in the trees are the xylem pressure at which 50% of hydraulic conductance is lost (P50 value), minimum xylem water potential, hydraulic conductivity, xylem anatomical properties, the mode of stomatal regulation and HSM. Our subproject tests the ‘diversity – community resistance hypothesis’ with respect to the role of tree hydraulic diversity for safeguarding productivity under a variable climate and contributes to the overall goals of the CRC by studying changes in the important productivity function across all forest land-use systems.

Mixed forests are a possible option to combine high wood production with nature conservation goals in forests. Norway spruce and Douglas fir are often used to enrich beech forests by fast growing conifers but it is not well understood how these species alter ecosystem functions. We study tree water status and tree hydraulics in pure stands of beech, spruce and Douglas fir, and mixed beech/spruce and beech/Douglas fir stands in 8 regions of Lower Saxony (lowlands and uplands, 40 stands in total) using tree climbers and a mobile elevator van for canopy access. We measure leaf water status, vpd sensitivity of stomatal conductance, xylem hydraulic conductivity, xylem vulnerability to cavitation, and sap flux in trees of the three species in pure or mixed stands. Main goal is to assess possible tree neighborhood and complementarity effects on the water use of the pure or mixed stands.

(Federal Ministry for Education and Science)

The German Nature Heritage on former military training grounds contains large tracts of pine plantations besides some near-natural broadleaf forest. The goal is to convert these pine plantations in the future into wilderness dominated by beech and oak forests. This interdisciplinary project searches for indicators of naturalness in the different broadleaf forests and pine plantations which differ in the time elapsed since management was abandoned. We investigate the biomass and productivity, fine root biomass, radial stem increment and soil chemistry and soil biological activity in pairs of mostly beech-dominated near-natural forests and nearby pine plantations in the north German lowlands in order to compare the structure and functionality of the two systems with respect to their naturalness. In a replicated large-scale experiment in a pine plantation in Brandenburg, different approaches of gap creation are tested for their effects on biodiversity, soils and structural diversity in order to accelerate the natural development toward a natural broadleaf forest.

SUBSOM – The forgotten part of carbon cycling: Organic matter storage and turnover in subsoils (FOR 1806)

This project is part of the joint research project FOR 1806 in which carbon cycling in the subsoil of forest soil profiles is studied. We investigate the functioning of deep roots of beech at 6 forest sites differing in soil chemistry and bedrock (from limestone to glacial till) in Lower Saxony. In the topsoil and the subsoil of the profiles, root dynamics are studied with rhizotron tubes, mineral nitrogen uptake is quantified by 15N tracer experiments, root water absorption is measured in real time with miniature sap flux gauges, and root exudation is quantified with a newly developed method where fine roots are placed in situ in glass syringes filled with glass beads in which the exudate is collected. We test the hypothesis that topsoil and subsoil roots differ in their specific physiological activity and that both root types have specialized on different tasks according to the contrasting resource availability in topsoil and subsoil. 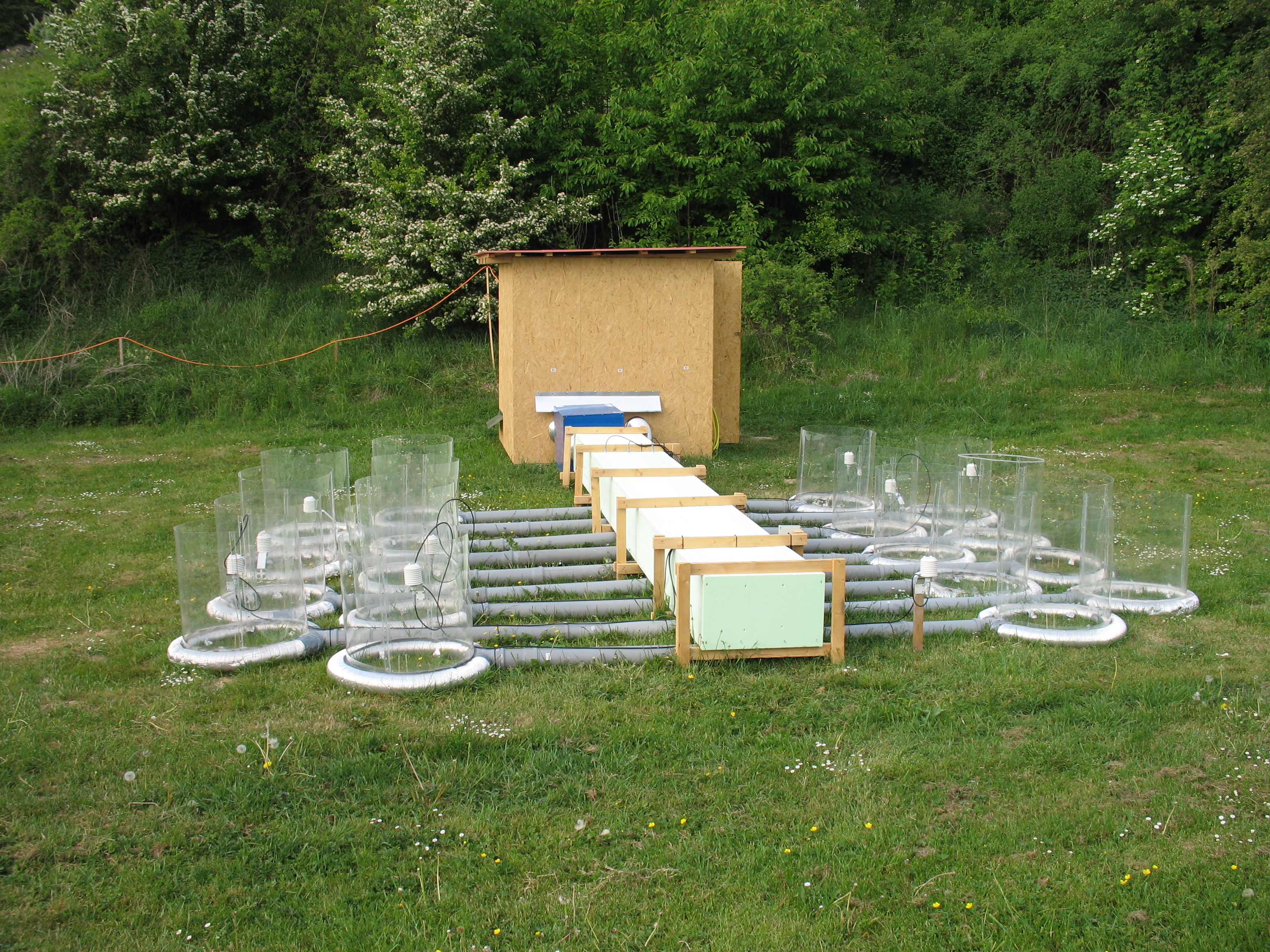 The research foci of the group cover a wide range of ecological areas. Generally, we offer topics for final bachelor and master theses of the respective study programs in all presented research areas and beyond those. More specific information can be obtained in a informal talk after pre-consultation either with Dr. Dietrich Hertel (dhertel at gwdg.de, Tel. 0551-39-5708) or Prof. Dr. Christoph Leuschner (cleusch at gwdg.de, Tel. 0551-39-5718).