Analyzing water and element fluxes in a beech forest ecosystem

In this RTP (Research and Teaching Project) near Ebergötzen, about 15 km east of the north campus of the University of Göttingen, we measure water and element fluxes of a north-facing and opposite south-facing slope in a beech forest ecosystem. The soils are Cambisols that developed in vertical successions of Pleistocene periglacial slope deposits (PPSD) with varying loess admixtures overlying lower-Triassic sandstone. Depending on the loess content, the Cambisols partly show initial podzolization or slight clay migration.
The aim of the investigations is to test the following hypothesis: Stronger solar radiation on the south-facing slope leads to higher evaporation and thus to lower amounts of percolating water in the soil. Since chemical elements are also transported with the percolating water, not only the percolating water but also the element fluxes in the soil and the material discharge from the system with the percolating water are lower on the south-facing slope. This difference in water percolation and element fluxes on the south-facing slope compared to the north-facing slope can also serve as an analog for the influence of climate warming on water and element fluxes in soils.
In addition, a weather station was established outside the forest to record open field precipitation, snow depth, relative humidity, temperature, wind direction, wind speed, and radiation every 15 minutes.
Parameters measured automatically every 15 minutes on each of the two plots include throughfall (15 tipping buckets per plot and aliquot discharge into PE sample bottles for laboratory analyses), stem flow (six beech trees per plot with aliquot discharge into PE sample bottles for laboratory analyses), soil water content, water tension, and temperature (at five soil depths with five replicate measurements per plot).
In addition, suction plates were installed on each plot at four soil depths (three replicates per soil depth). The soil solution obtained by means of suction plates is analyzed in the laboratory for particulate and dissolved carbon as well as for a wide range of elements. Energy is supplied by two fuel cell modules running on methanol. The data are transmitted automatically via GPRS.
A database has been programmed, which can be viewed by any interested person on the Internet at the link: http://134.76.18.19/public/
In the frame of research collaborations, we also make parts of the data available for download. As soon as we ourselves have completed the evaluation and publication of the data, we will make all data available for download. 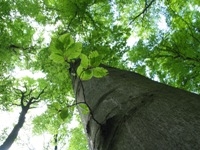