The speaking exam in English is an exciting affair for pupils in the sixth grade. In three sections, they have to demonstrate their speaking skills in the first foreign language in front of two teachers - one examining and one recording. Starting with an interview section, followed by a monologue and finally in a concluding dialogue, the pupils have to speak in English for several minutes - not an uncomplicated affair, especially when the Corona pandemic further complicates the opportunities to speak.

In class 6bl of the Harnberg-Gymnasium Göttingen, however, a good solution was found to prepare for the speaking exams. Through the English didactics master's seminar "Picture Narratives in the EFL Classroom" at the Georg-August-Universität Göttingen, led by lecturer Kira Sara, English teacher Sabine Brumby-Hartogh found eight open-minded students who were willing to support the 25 sixth grade pupils in small groups. The deal was as follows: The students could gain digital practice experience in dealing with the learners during their seminar time, while the pupils got another opportunity to prepare for the speaking exams - a win-win situation.
From May 12th onwards, set groups of students and learners met on Wednesday mornings in BigBlueButton video conferences and practised speaking English in the speaking exam disciplines they would later be tested on. The students also prepared appropriate practice material for the learners. 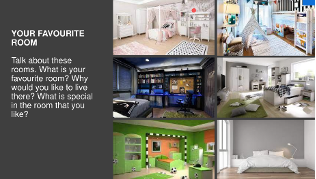 However, with the transition to Scenario A from the end of May, the cooperation came to an end for the time being. From then on, the pupils were allowed to spend their mornings in the school on Wednesdays in class size again and thus the students also returned to the digital seminar room full time.
Fortunately, there was some interest on both sides to continue, so two students and a handful of pupils volunteered to meet online for more sessions - now on Wednesday evenings instead of Wednesday mornings. On a voluntary basis, they continued to practise the fluent monologue and rehearse appropriate communication in dialogue. One week before the real speaking exams, the final rehearsal took place - at the request of the learners - in the form of a mock exam, which the students had prepared. 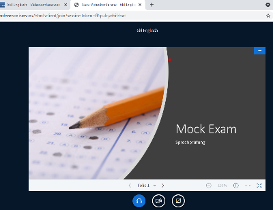 Both sides praised the good cooperation, which was organised flexibly and at short notice. The students left with valuable practical experience and the pupils were well prepared for their speaking exams.

A report by Julia Neumann and Till Schröter (students) 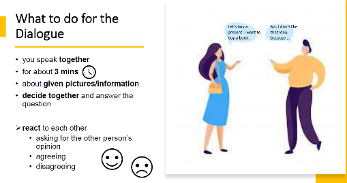