EFForTS works in Jambi Province which is located in the south-western part of Sumatra in Indonesia – one of the tropical lowland rainforest area in Southeast Asia (see Fig. 1, Google map). 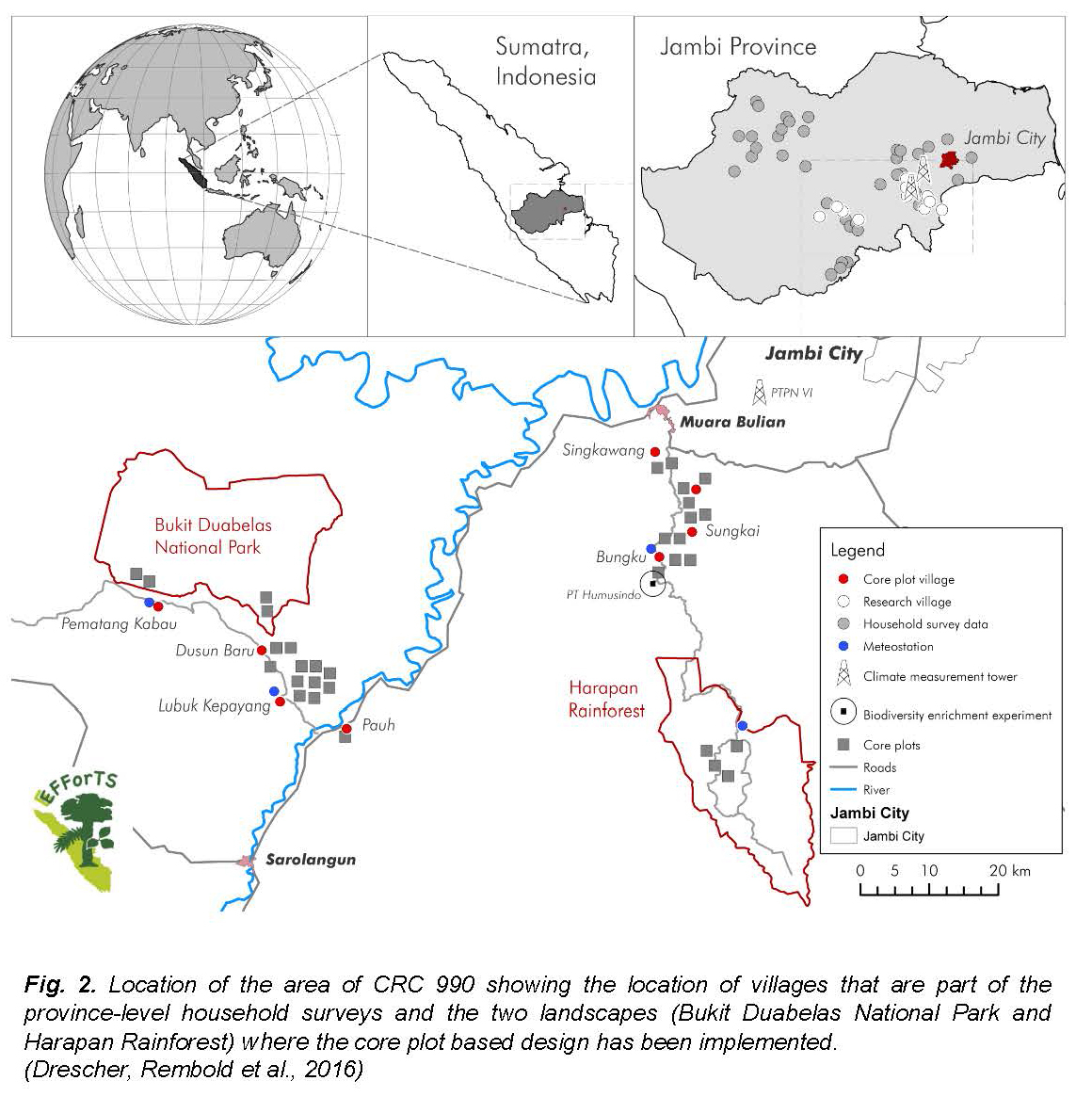 Our research activities focus on four land-use systems:
(i) lowland rainforest as reference sites, (ii) jungle rubber (an extensively managed agroforestry system), and smallholder-owned monoculture plantations of (iii) rubber and (iv) oil palm.
Lowland rainforest reference sites represent old-growth forest but have been subject to selective logging in the past. Contiguous areas of primary rainforest are no longer existing in Jambi, but the logged-over lowland rainforest reference sites selected have a similar forest structure (Kotowska 2015) and species composition (Putz et al. 2012). Jungle rubber represents an extensively managed system which was established by planting rubber trees into secondary forest, sometimes together with other species, such as fruit trees or woody species used for timber and fuel wood. Structurally and in terms of biodiversity jungle rubber resembles secondary forests in mature phases (Gouyon et al. 1993). Its implementation dates back to the early 20th century.
In each of the two landscapes (comprising blocks in a randomized complete block design), four replicates of each of the four land-use systems (including the lowland rainforest as reference) were investigated. These 32 sites constituted our core sites in Phase 1; covering these core sites was mandatory for all CRC Scientific Projects (SPs) (see Fig. 3). 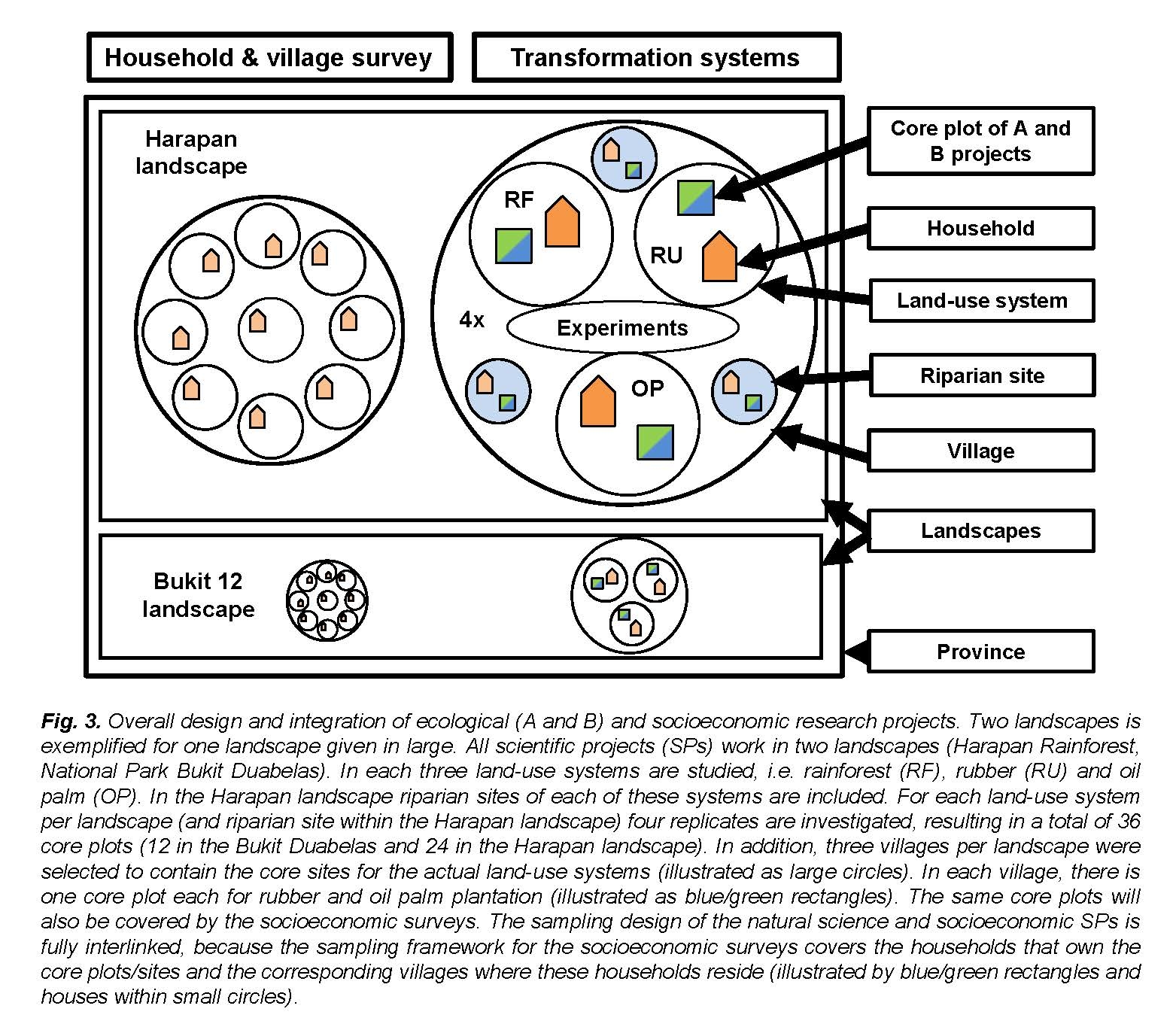 In Phase 2, we will abandon the jungle rubber sites as core plots but will maintain the remaining 24 other core plots. Excluding the jungle rubber treatment from our core design was motivated by the fact that jungle rubber is increasingly transformed into oil palm or intensive rubber. Trends towards intensive rubber makes the distinction of jungle rubber as an own land-use system increasingly difficult (the socioeconomic surveys revealed that farmers themselves hardly use the distinction anymore). However, individual SPs will continue investigating jungle rubber; the jungle rubber plots established in Phase 1 will be maintained in Phase 2.
Reducing our core design was also necessary to allow including an additional treatment, i.e. the investigation of riparian areas (see below). For this new analysis, 12 additional core plots will be included to investigate the influence of different soil moisture regimes on ecological processes; i.e. 4 plots each will be located in forest (PT. REKI), rubber and oil palm systems (Harapan landscape only). Therefore, a total of 36 core plots form part of the core design in Phase 2 of EFForTS, with investigation of these plots being mandatory for all natural sciences projects.
In addition to investigating the three dominating land-use systems within the CRC core plot design, in two experiments future management options of oil palm plantations will be investigated in two experiments: (1) The B11 Enrichment experiment has been established in Phase 1 on the privately-owned oil palm plantation PT Humusindo in the Harapan landscape. (2) In Phase 2, a Management experiment was set up at PTPN VI in the Harapan landscape investigating reduced nutrient and pesticide use for ecological and socioeconomic functions of oil palm plantations.
Both experiments address the Heterogeneity umbrella theme in Phase 2 and are designed to investigate principal questions of how to establish sustainable oil palm management systems, optimizing both conservation needs and socioeconomic benefits, and restore important ecological functions in an impoverished oil-palm landscape (for more details see B11). Apart from these experiments and following the program of Phase 1, socioeconomic surveys will be undertaken in the same sites, but will also include a broader area to be able to capture institutional heterogeneity, which is important for comprehensive understanding of socioeconomic causes and consequences of land-use changes.