The Drummer Boy as icon

The drummer boy, in various manifestations, has been chosen as the icon of the group "Music, Conflict and the State".

Children, particularly boys, have been used as musicians by armed forces and armed groups for many centuries, as many paintings, illustrations, and popular songs testify. Some of these documents feature drummer boys who have been wounded or killed in battle. Some are clearly intended as propaganda for the war effort.

According to contemporary definitions, these drummer boys, and the many boys and girls who in our own time have to provide music and entertainment for armed forces and armed groups, are child soldiers. Recruiting children into fighting forces in this way is now classified as a war crime under the Rome Statute of the International Criminal Court. 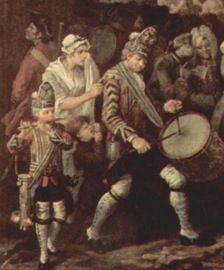 As well as drummer boys, our pages also feature a boy playing a fife. You'll find him in the detail from William Hogarth's The March of the Guards to Finchley, which shows Londoners preparing to defend themselves during the Jacobite Uprising of 1745-1746. This picture is now owned by Coram / The Foundling Museum. In 1739, Thomas Coram set up a home for abandoned children and street children, which received support amongst other things from the work of G. F. Handel and other artists - including Hogarth, who originally donated the picture for the good of the home.

Today, the NGO Coram continues to work for vulnerable children and young people, while the home itself is now The Foundling Musem, which tells the story of the home and its work and which also organises a number of important art exhibitions.

You can find out more about their work here:
Coram
The Foundling Museum