Primate societies are highly variable. Groups may differ in the level of stratification, in the degree of cooperation between related and possibly also unrelated individuals or in the way group members deal with conflicts. Variation may occur across different taxa, across populations or between the sexes. Based on evolutionary theory this variation in cooperation and competition evident across primate societies including our own can be explained by differential fitness payoffs. Linking the variation in social behavior to ecological and phylogenetic factors, investigating the different strategies for either sex, and determining the adaptive value of social behavior are research aims in the junior research group on social evolution in primates. Research in the group combines field studies on primates (mainly macaques) in their natural habitat with experimental approaches in captivity. We use molecular techniques to monitor reproductive status, physiological dispositions for cooperation and competition and genetic relatedness. Using comparative methods and agent based modeling we work on identifying evolutionary patterns and generating clearly directed predictions. 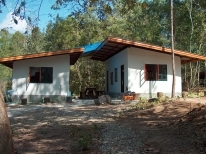