The project “Environmental and land-use change in Sulawesi, Indonesia (ELUC)” has been conducted between October 2010 and December 2012 by the Georg August University Göttingen (GAUG) and its Indonesian partners. The project based on the former SFB 552, "Stability of Rainforest Margins in Indonesia - STORMA" (2000-2009)
The aim of ELUC was to improve our understanding of the processes underlying environmental and land-use change in Indonesia. The consequences of land-use choices by smallholder farmers who currently drive deforestation at the margin of the Lore Lindu National Park in terms of natural ecosystem services have been investigated by teams of natural scientists (Clough, Hertel, Hölscher, Knohl & Panferov) using experimental and modelling approaches. Patterns of plant diversity, carbon sequestration and ecosystem functioning have been examined along altitudinal gradients in natural forests, which has been supplemented by project-specific fertility and humidity gradients to improve our understanding of environmental processes and their response to change both at present and in the past (Behling, Culmsee). An interdisciplinary modelling team (Wiegand, Meyer & Lay) did use existing STORMA data from the study region to develop an integrated land-use model to enable further exploration of ecological and socio-economic consequences of land-use management.


Research area
The study is carried out in the Lore Lindu National Park in Central Sulawesi, Indonesia.
more... 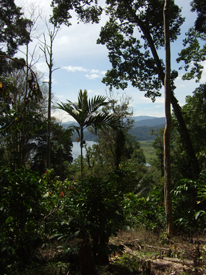