LUM – The Land Use Management DSS within carbiocial

This research cluster strives towards the development of a land-use management decision support system (DSS) for the Southern Amazonia region. In a joint action of socio-economic, economic and biophysical modeller’s subprojects, two types of DSS for different groups of stakeholders are envisaged: a computer-based DSS for planners & decision-makers, including simulation models for own use and data tools to grasp recent climate trends, and a simple hand-held version for farmers. From the very first stage of development stakeholders, such as farmer organisations, planning authorities and the agricultural research enterprise EMBRAPA, are involved and their feedback will significantly influence the result. Existing BMBF software will serve as a starting point to plug in new ideas. However, with the merging of agent-, rule- and process-based models onto a given platform being a major challenge in itself and with the reception of a computer-based platform by the stakeholders yet untested, the final product is still unknown. 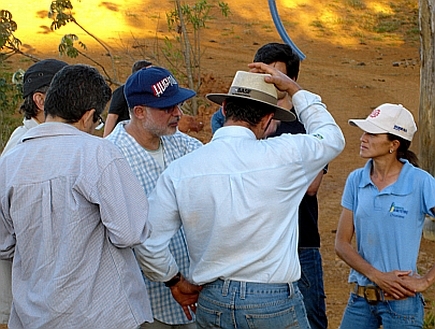