Unsere Arbeitsgruppe nutzt und entwickelt verschiedene Rastersondenmikroskopieverfahren, um aktuelle Fragen der Grundlagenforschung zu beantworten.
Zurzeit forschen wir an folgenden Themen
Ladungstransport in Graphene
Access to local transport properties Electronic transport on a macroscopic scale is often described by spatially averaged electric fields and scattering processes. To capture electronic transport on the atomic scale, local and non-local scattering processes need to be considered separately. An experimental study based on low-temperature scanning tunneling potentiometry has allowed us to separate different scattering mechanisms in graphene. Most importantly, we are able to show that the voltage drop at a monolayer/bilayer boundary is not located strictly at the structural defect.
back to top
Dynamic processes studied atom by Atom - Combining pulsed optical exciation and STM/STS
Pump-probe experiments combined with SPM allow to resolve dynamic processes on the nanometer scale. We have utilized this to study the charging process of single donors in GaAs. Our experiments show that the combined dynamics of bound and free charges become important to better understand the physics of nano-scaled systems.
back to top

Correlated electron systems  - Kondo effect of single and coupled magnetic bulk impurities
Scanning tunneling spectroscopy allows to study single magnetic impurities in bulk Crystals.This surprising finding has opened up a new way to investigate the interplay between the Ruderman-Kittel-Kasuya-Yosida interaction and the Kondo effect, which is expected to provide the driving force for the emergence of many phenomena in strongly correlated electron materials. We have investigated iron dimers buried below a Cu(100) surface by means of low-temperature scanning tunneling spectroscopy. Two magnetic impurities in a metal are the smallest possible system containing all these ingredients and define a bottom-up approach towards a long-term under-standing of dense Systems.
back to top
New material classes: hexaborides and iridates
We have recently started two new projects.
back to top
Metal-semiconductor Interfaces
back to top
Electronic properties of dopant atoms in semiconductors
back to top 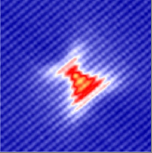