The aim of the German Database on Vegetation History partly differs from the other European databases. In Göttingen, we make available the full record of what has been published so far in vegetation history in Germany. The database, being accessible to everyone, will be

Work on the German Database on Vegetation History started in 1971. The basic idea of the database was to develop a documentation which contains references, localities and main results of all primary investigations dealing with fossil plant remains of Quaternary and late Pliocene age in Germany.
The database consists of four parts:

Mapping:
Generally, we use topographic maps with a scale of 1:100.000. (Figure 1) The investigated localities are mapped with symbols indicating the age of the site (e.g. Holocene, Late Glacial, last interglacial, other inter-glacials, glacial periods, Pliocene). 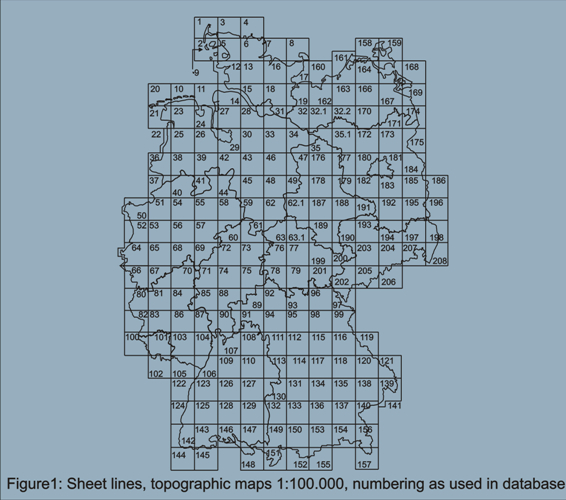 In addition, the symbols indicate whether the record derives from pollen, macrofossil or archaeobotanical investigations or from archive studies. Each investigation of a locality has a complex number composed of a number for the map sheet and for the locality itself. If a locality has been investigated twice and more, this is indicated by a letter index following the locality number. For better use, the symbols are repeated on the reverse of each map sheet together with the authors name(s) and the year of publication.( Figure 2) 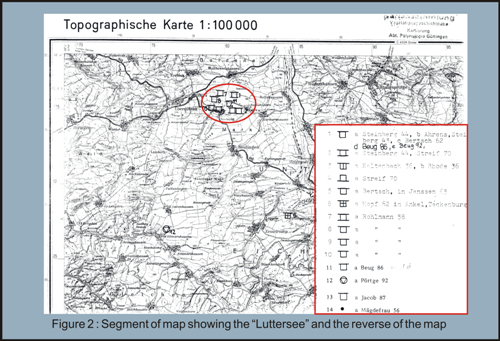 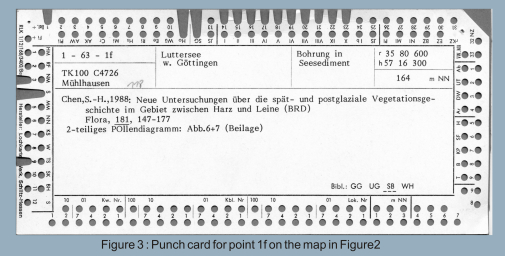 The written information on each punch card contains full citation, and furthermore, the name, type (bog, lake etc.), coordinates and altitude of the site. In addition, the number of pollen diagrams, lists of other remains and radiocarbon data are given. The punched margin of the card permits the indication of the Late Glacial and Holocene pollen zones (after Firbas), the main units of the Pleistocene and Pliocene, the archaeological periods, special kinds of dating, details of the plant record (e.g. wood, charcoal, leaves, mosses, algae etc.) and information on the composition of the investigated profiles (e.g. ombrotrophic or minerotrophic peat, recurrence surfaces, lake deposits, marine influence, soils etc.). There are abbreviated explanations on the margin of the punched cards which allow one to read the punched information directly. (Fig. 3)
Meanwhile the data of the punch cards have been transferred to a PARADOX© 4.5 database (Figure 4). PARADOX© was chosen to be in accordance with the EPD.

Copies of every published Diagram collected in a separate folder for each map sheet, and a collection from offprints of the original literature are still available on real paper.

Conclusions:
Unlike the EPD our database never contained the raw data of pollen counts or Tilia©-files. The German Database on Vegetation History is a tool to access the metadata of publications. Our database was for a while funded by the German Research Council (DFG). With the end of support and the retirement of Prof. Beug only voluntary work of the staff members of the Department for Palynology and Climate Dynamics could keep the German Database on Vegetation History alive. With the appointment of Prof. Behling there is a new interest in obtaining and continuing the data-collection for the future. 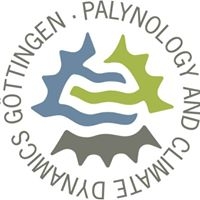