Launch of the Digital Archive "The Long Emergency. Media and Democracy in India"

CeMIS is proud to announce the launching of the digital archive "The Long Emergency. Media and Democracy in India" , which is coordinated by Prof. Srirupa Roy.

The government of India declared a national emergency citing internal instability in June 1975. By June 26th, the day after emergency had been declared, media outlets in the country had received instructions on news that must be censored. Some newspapers ran blank editorials as protests. In the eighteen months that followed, the press censorship rules remained in effect and additional forms of pressure were exerted on the media. These ranged from the withdrawal of state advertisements to income tax raids on media owners and phone calls to journalists conveying “helpful suggestions” about the news they might (or might not) carry. Many journalists were arrested for protesting the emergency, or for holding views that were considered inimical to state authority. Many others supported the emergency as a necessary measure. Most, however, lay low until the emergency was lifted and the media began reporting actively on the news that they had not covered in the years of the emergency, in a burst of “new journalism” that would shine a light on post-emergency abuses of power as well.

Lalit Vachani, the CeMIS-based documentary filmmaker, will present his new film, The last days on Monday 18 February at 7.30pm in the Lumière in Göttingen. The screening will be followed by a round table discussion about the long summer of migration. Podium guests are Miriam Düsterhöft (Koordinationsstelle Migration und Teilhabe, Aurich), Johanna Elle (Institut für Kulturanthropologie / Europäische Ethnologie, Universität Göttingen) and Jarno Lang (ASB, Hildesheim). The film is in German and English with English subtitles. The roundtable will be in German.

The last days is about the final days of an emergency refugee shelter in a small town in the Harz mountains in Germany. It is a quiet film about some of the ordinary, and fragile acts and experiences that create refuge. In 2015-16, close to a million refugees entered Germany following Chancellor Angela Merkel's dramatic announcement that “Wir schaffen das” (We can do it!), that enabled an "open border" policy and Willkommenskultur (“culture of welcoming”) towards refugees fleeing wars in Syria and other parts of the world. In small towns like St. Andreasberg, populations doubled overnight as emergency refugee centers were opened to accommodate the endless stream of refugees. But when we began filming at the ASB (Arbeiter-Samariter-Bund) St. Andreasberg refugee centre in the summer of 2016, the moment of refugee arrival with all its uncertainty, panic, and expectation had passed.

The last days is a film about the interminable wait for the eventual closure of the center. As ASB workers learn to pack and dismantle furniture, and trucks for "Catastrophe Management" carry away unused goods, eight German social workers share their memories and stories of fleeting moments spent with the refugees. At one level, The Last Days is a documentary with absurdist overtones. At another level, it is a poignant reminder of a remarkable moment when open borders and new beginnings seemed a real possibility.

CeMIS professor Patrick Eisenlohr's new book "Sounding Islam" has just been released by University of California Press. "Sounding Islam" provides a provocative account of the sonic dimensions of religion, combining perspectives from the anthropology of media and sound studies, as well as drawing on neo-phenomenological approaches to atmospheres. Using long-term ethnographic research on devotional Islam in Mauritius, Patrick explores how the voice, as a site of divine manifestation, becomes refracted in media practices that have become integral parts of religious traditions. At the core of his concern is the interplay of voice, media, affect, and listeners’ religious experiences. "Sounding Islam" sheds new light on a key dimension of religion, the sonic incitement of sensations that are often difficult to translate into language.


Sujatha Gidla: “Ants among elephants. An untouchable family and the making of modern India”

To be born Dalit (formerly referred to as “untouchables”) in India is to have the structures of one’s life determined. In the critically acclaimed Ants Among Elephants, Sujatha Gidla poignantly traces the “normal lives” of her Dalit family and friends. After studying physics and working as a researcher at the Indian Institute of Technology in Madras, Sujatha Gidla moved to New York, where she now works as a subway conductor. The freedoms she found in her adopted home allowed her to reflect on the social constraints and oppression of the Indian caste system, looking at them especially through the lens of her own history. Despite being a democratic, independent country since 1947, this powerful novel shows that the caste system remains strong in India today.
The event will be moderated by Dr. Nathaniel Roberts from the Centre for Modern India Studies (CeMIS) at the University of Göttingen. It will be in English.

An interview with the author


Beyond the Either-Or: An Interview with Patrick Eisenlohr

The February 2018 issue of Cultural Anthropology included the research article “Suggestions of Movement: Voice and Sonic Atmospheres in Mauritian Muslim Devotional Practices,” by Patrick Eisenlohr, who heads the research group on Society and Culture in Modern India at the University of Göttingen. What follows is a lightly edited transcript of an interview that contributing editor Sander Hölsgens conducted with Eisenlohr about the atmospheric implications of the human voice.
Read the full article and the interview with Patrick Eisenlohr here.

Dr. Nathaniel Roberts was awarded the 2018 Bernard Cohn Prize for his book "To Be Cared For: The Power of Conversion and the Foreignness of Belonging in an Indian Slum" (2016, University of California Press). To Be Cared For offers a unique view into the conceptual and moral world of slum-bound Dalits (“untouchables”) in the South Indian city of Chennai. Focusing on the decision by many women to embrace locally specific forms of Pentecostal Christianity, Nathaniel Roberts challenges dominant anthropological understandings of religion as a matter of culture and identity, as well as Indian nationalist narratives of Christianity as a “foreign” ideology that disrupts local communities.

CeMIS researchers Prof. Dr. Sebastian Vollmer and Michaela Theilmann are members of an international team of researchers from the University of Göttingen, Harvard University, and the Heidelberg University Hospital, which found high rates of diabetes and hypertension among middle-aged and elderly people across all geographic measures and sociodemographic groups in India. This is the result of the first nationally representative study of those conditions in the country. The researchers also found unexpectedly high rates of hypertension among young adults. The study was published in JAMA Internal Medicine.

The researchers wanted to find out how the prevalence of diabetes and hypertension in India varied by state, rural vs. urban location, and by sociodemographic characteristics such as education and household wealth. They used health data collected from roughly 1.3 million adults across India between 2012 and 2014, which included plasma glucose and blood pressure measurements.

“The prevalence of diabetes and hypertension in India is much higher than commonly believed,” says Professor Sebastian Vollmer, Chair of Development Economics and Director of the Centre for Modern Indian Studies (CeMIS) at Göttingen University. “These so-called lifestyle diseases are becoming more and more problematic, not only in the Western world, but also in India. Unfortunately, the health care systems are not yet prepared to face the new situation.”

“The understanding of how diabetes and hypertension are spread across a large country like India is essential for an active prevention, early diagnosis and treatment of these diseases,” explains Harvard University’s Dr. Pascal Geldsetzer, lead author of the study. Prof. Dr. Dr. Till Bärnighausen, Director of the Institute for Public Health at Heidelberg University Hospital, adds: “In order to avert the health and social consequences of this epidemic, considerable investments are necessary.”

India is home to more than a sixth of the world’s population. The country is in the midst of a rapid epidemiological transition: Rates of noncommunicable diseases have risen in recent decades and are likely to continue as India’s population ages and urbanizes. Meanwhile, many areas of India still face substantial burdens of infectious diseases and poor maternal and child health. 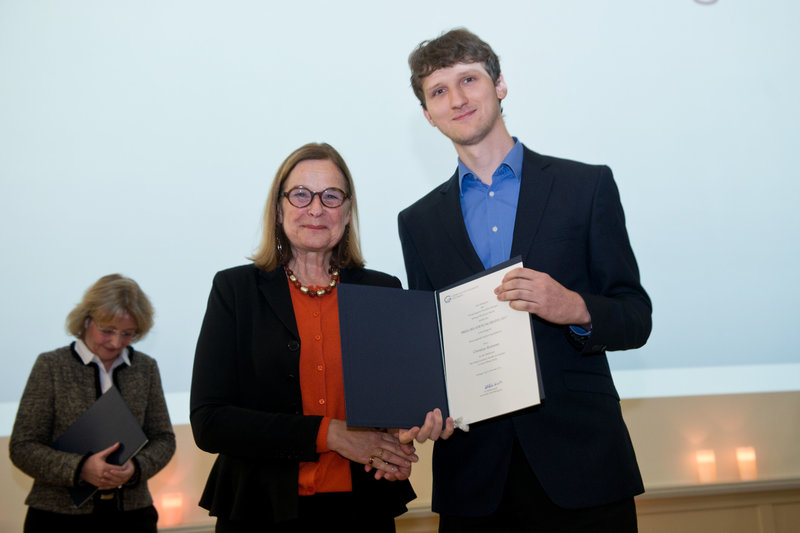 Christian Bommer, Esther Heesemann und Vera Sagalova from the Development Economics group here at CeMIS received the University of Göttingen's Foundation Council Award for "Herausragende Nachwuchspublikation" ("Outstanding Publication by Junior Researchers") on Friday 8 December. The trio received the prize for their article on The Global Economic Burden of Diabetes: A Cost-of-Illness Study published in The Lancet Diabetes & Endocrinology earlier this year. In the article, they estimate that diabetes treatment as well as diabetes related production losses account for $US1.3 trillion globally, equivalent to 1.8 percent of global GDP. In India, diabetes costs about 1.04 percent of the national GDP. The article has received enormous international academic and media attention.

Photo: Christian Bommer receives the award from Prof. Dr. Barbara Ischinger, a member of the University of Göttingen's Foundation Council.

From 28 May to 8 June 2018, the University of Göttingen will host up to 20 advanced international students (Masters or PhD level) working in global health or development economics at the "Global Health and Poverty" summer school.

Organised by CeMIS/ Department of Economics Professor Sebastian Vollmer, the school will address the central health challenges of the world today, focusing particularly on their many intersections with poverty. To do this, participants will look at the complex interplay of a person’s health status and economic prosperity or deprivation in the context of low- and middle-income countries.

Find out more and apply

On Saturday 16 September, Arundhati Roy read in the Alte Aula in Göttingen. The Aula, the symbolic heart of academic life in Göttingen, was sold out.

Introduced by Nate Roberts from CeMIS, Arundhati Roy read from her new novel "The Ministry of Utmost Happiness" in English, while Andrea Strube from Deutsches Theater in Göttingen read from the German translation.

The readings were interspersed with lively conversations between Arundhati Roy and Christoph Senft (Berlin) about the process of writing, the return to the literary stage 20 years after "The God of Small Things", the relationship between fiction and reality and the current situation in India.

It was a fantastic night with an enthusiastic crowd and we thank everybody who participated - especially Anja Johannsen, Gesa Lindemann and the volunteers at the Literarisches Zentrum Göttingen, our cooperation partner - for making it a big success.

Read a review in the Göttinger Tageblatt (German only). 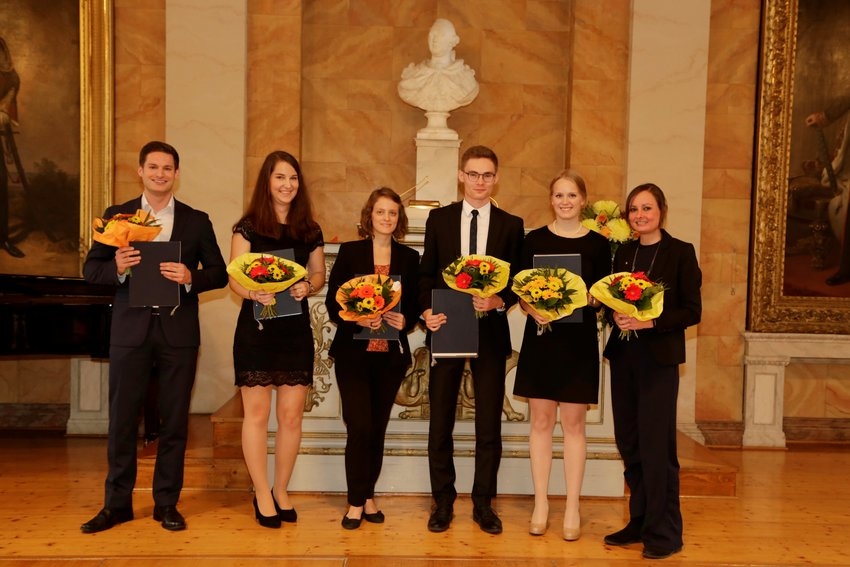 Lisa Bogler was awarded the “Florenz Sartorius Preis” as an outstanding graduate student in economics at the University of Göttingen on October 20.

The Development Economics/CeMIS PhD student is now working on health economics, with a focus on Indonesia.

The prize, which were donated by the Sartorius AG in Göttingen, were also awarded to outstanding graduates from Business Administration, Business Information Systems, and Business and Human Resource Education.