Public Roundtable:Trauma in the Context of Global Migration – Opening up an Analytical Field

The Roundtable “Trauma in the Context of Global Migration – Opening up an Analytical Field” brought together academics and practitioners from different disciplinary backgrounds to discuss the concept of trauma in the context of global migration. Since at least the summer of 2015 representation of migrants and refugees as traumatized masses have been omnipresent in European media, politics and research. On the one hand, they have raised awareness for the partly horrible and life-threatening events refugees and migrants have been facing and the violence continuum that stretches from their countries of origin, via their routes to the reception context. Certainly, these representations mobilized the compassion and solidarity of large part of the civil society. On the other hand, however, they convey a specific image of refugees and migrants as passive victims in need of help. It is in this regard, that the roundtable closely examined the multiple dimensions that the association of (forced) migration with trauma entails. The discussion was opened by inviting the panelists to share their perspectives on the relations between migration and trauma from their respective disciplinary background. In the second round, the conversation deepened the topic by considering alternative conceptual frameworks and contexts. After that, the discussion was opened up for the plenum in the third round. The first round began with the question “What do we talk about when we relate trauma and migration to each other?” According to Orkideh Behrouzan (Medical Anthropologist, SOAS University of London), the concept of trauma is individualizing and pathologizing; the experiences, however, are much more complex and intersubjectively shared. In this sense, she spoke out for an analytical concept that is better able to include the socio-political and historical background of the migrants’ and refugees’ experiences. Shahram Khosravi (Social Anthropologist, University of Stockholm) underlined the individualizing nature of the concept of trauma. Trauma should be interpreted and also represented as a process, citing Hannah Arendt that trauma in the context of (forced) displacement is an ongoing process of finding a new home. Many more actors other than the migrants and refugees themselves (as assumed in the more conventional concepts) shape this process with their own interests. The role of the state in producing traumatic experiences, such as in the Mediterranean Sea, is often neglected when we talk about trauma. Maria Belz (Psychologist, Network for Traumatized Refugees in Lower Saxony) pointed out that psychological trauma is determined by the diagnostic system and needed as a diagnostic tool to treat patients individually. However, she is aware that the concept and the diagnostics attached to it (e.g. PTSD, Post-Traumatic Stress Disorder) are westernized as most often Western practitioners in this field apply the concept in a way they understand the world. The second round followed the question whether the alternative concepts for trauma are able to go beyond individualistic views in order to integrate the collective perspective without erasing people’s suffering. Behrouzan underlined the necessity of expanding the term trauma instead of rejecting it. She argued that the biggest problem with trauma lies in the dominant discourse of PTSD which is located in a singular event. This perspective neglects that life is rather a series of events that can be rupturing and traumatizing. She proposed in this matter to focus on the “interpretation” rather than on the “event”: “We need to culturally situate and translate the experience before labeling it with trauma”. Belz also underlined the role of integration as a bidirectional interaction in the process of healing. According to Khosravi, there is a huge amount of knowledge production in the area of migration, integration and trauma. That brings up questions like “What kind of knowledge has been produced? And for whom? What to do with that knowledge? Who needs trauma?” He mentioned that this kind of questions help to refocus the gaze away from the migrants and refugees but highlight power relations instead. In the Q&A session the need for interdisciplinary training and pedagogy for psychologists was emphasized. Behrouzan and Belz agreed on the capacities of art for understanding and articulating the subjective experiences and for challenging taken-for-granted assumptions. Khosravi pointed to the importance of genuine decoloniality of knowledge production and a transformation of epistemologies in this field. 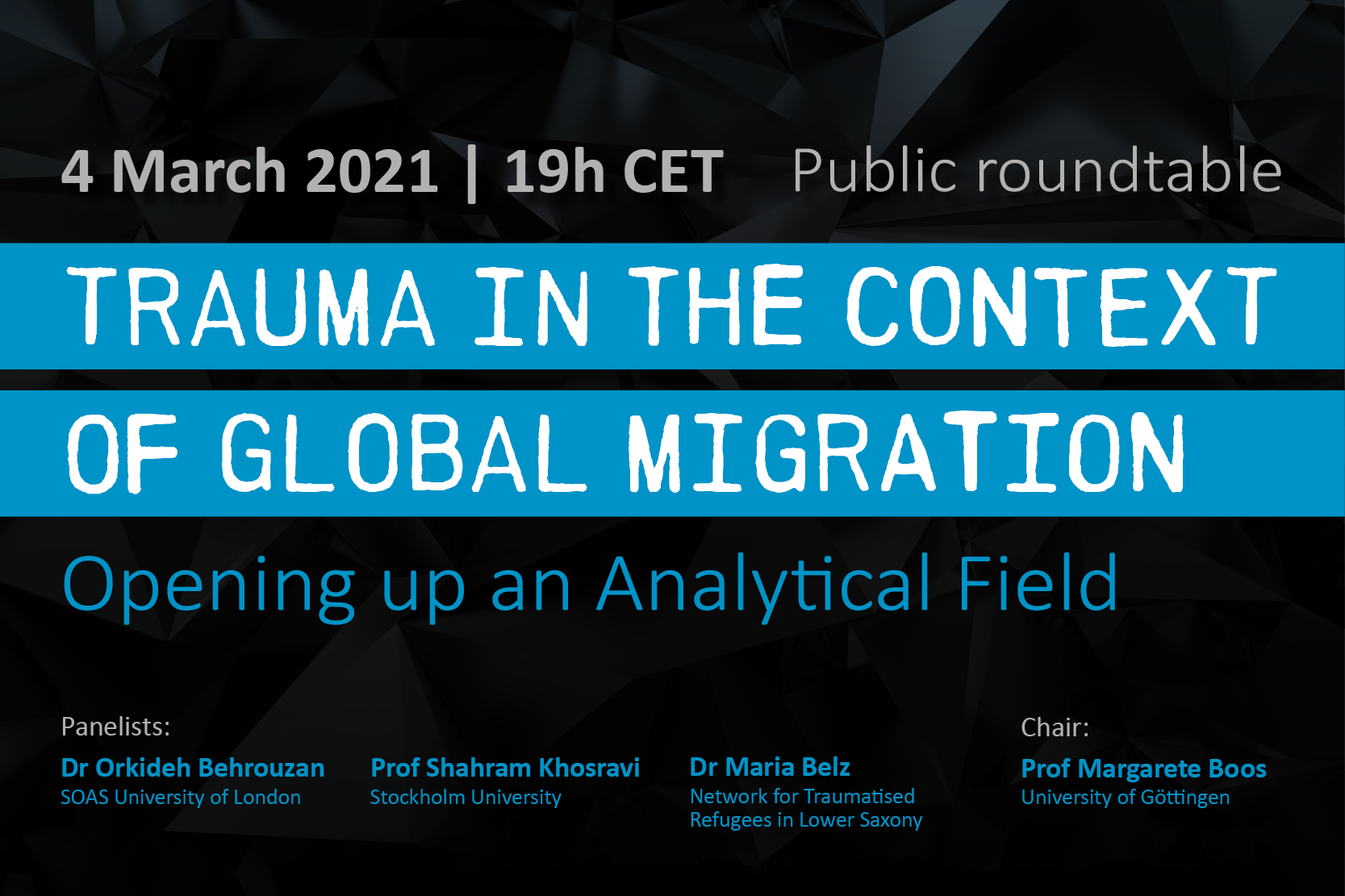