Research at the Historic Observatory

The observatory on Geismarlandstrasse was constructed from 1803 to 1816. It is the only public (formerly royal) observatory in Lower Saxony (or the former Kingdom of Hanover, respectively) up to today. It was designed as a modern institute with freedom for research, located outside the city gates with an unobstructed view of the sky. The equipment of the “new” observatory was mainly determined by its first director Carl Friedrich Gauss (1777–1855).

The two Meridian Halls were of particular significance. In them, Gauss had meridian circles installed in 1818 (eastern hall) and 1819 (western hall) to be able to determine stellar coordinates and thus achieve exact measurement of space and time, amongst other things. The two meridian circles by Repsold and Reichenbach were the main instruments used for astronomical angular measurement well into the 20th century. Openings in the walls with an exact north-south orientation which could be used for this kind of research, the so-called meridian slits, had been envisioned for the building even in the early planning stages.

After Gauss’s death, Wilhelm Weber and Peter Lejeune-Dirichlet became provisional directors of the observatory, but neither of them was an astronomer. After Dirichlet’s death, Gauss’s former assistant Wilhelm Klinkerfues became the co-director alongside Weber.

In 1868 the astronomy and geomagnetics research instututions were split up into a theoretical and a practical section. The former was directed by Ernst Schering and became the “Institute for Geophysics” in 1898, which was relocated to the Hainberg hill. The latter was directed by Wilhelm Schur after Klinkerfues’s death; with Karl Schwarzschild’s appointment as director in 1901, a period of internationally acknowledged top-level research in astrophysics at the observatory commenced. The subsequent directors were Johannes Hartmann, Hans Kienle, Paul ten Bruggencate, Hans-Heinrich Voigt, Rudolf Kippenhahn, Klaus Fricke, Klaus Beuermann, and finally Stefan Dreizler. In 2005 the Institute for Astrophysics was moved to the new building of the Faculty of Physics at the natural sciences campus.

Now that the renovations according to historical plans and the repairs to the dome are complete, the historic observatory is the headquarters of the Lichtenberg-Kolleg, amongst others. Like Gauss and his successors, today’s fellows and associates of the Lichtenberg-Kolleg enjoy a great degree of freedom to conduct focused research and intensive scientific exchange as well as to undertake specialised and interdisciplinary collaborations in the humanities and the social sciences right here at the historic observatory. 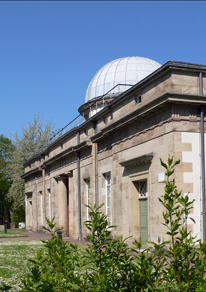