In 1823 and 1824 Gottfried Semper (1803 to 1879) studied mathematics and history at the University of Göttingen and continued his studies in Munich and Paris. Following a research trip through Italy and Greece he championed a new image of the antiquity, which eventually prevailed in the academic debate. In 1834 Semper was offered an appointment in Dresden, where he taught and researched as professor for architecture and director of the Academy of Arts. He designed and built the Dresden Opera House as well as the new Art Gallery until having to flee due to his participation in the 1849 May uprising. In 1855 the important German architect received an appointment in Zurich; here he designed, built and managed the Polytechnical School and wrote his main theoretical work on practical aesthetics. From 1871 to 1877 Semper was in Vienna, where his responsibilities included the building of the Hofburg and the Burgtheater. 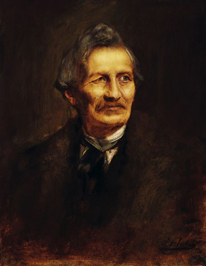