Unlike the Forest Botanical Garden which presents woody plants arranged in systematic groups, tree and shrub species within the Arboretum are arranged according to geographic regions of collection (China, Japan, Caucasus and Asia Minor, Korea, and North America).

Special features of the Caucasus and Asia Minor section

The Caucasus and Asia Minor section is situated around the dormitory on Kellnerweg (see map). However, with plans to build a new library of natural sciences underway, the section is facing relocation in the coming years. At the new location, below the Max Plank Institute and between Fassbergstraße and Otto-Hahn-Straße, the first woody plants have already been planted. The relocation is expected to complete within two year’s time. Overall the section comprises about 50 tree and shrub species, with more plants currently being cultivated.

From a geographical point of view the region Caucasus/ Asia Minor is of outspoken interest. Especially in the Caucasus and bordering northern Iran the arrangement of mountain ranges results in contrasting geological and climatic conditions, with orographic rainfall prevailing in western regions and rain shadow in the east. Reflecting the range of climatic conditions, the vegetation is characterized by a diversity of species and subspecies. Many of these are on the verge of extinction, due to political instability and large-scale overexploitation of forests on a regular basis in these areas. 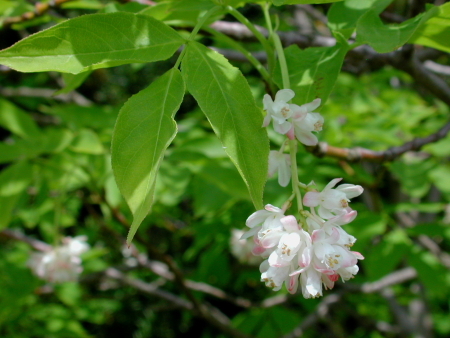 Declared a 'National Conservation Collection' (Nationale Schutzsammlung) by the 'Botanical Gardens Association' (Verband Botanischer Gärten, VBG), the Caucasus/ Asia Minor section as a living reference collection plays a pivotal role in the conservation of gene resources of the region’s trees and shrubs. Since 1999, on behalf of the Federal Agency for Nature Conservation (Bundesamt für Naturschutz) the VBG, which represents Botanical Gardens of the German-speaking countries, has developed a concept to identify important collections, worthy of particular attention. This concept aims at the conservation of cultural heritage and plant biodiversity, as well as protection and continuity of botanical collections. Other 'National Conservation Collections' include the Japan and Korea sections of the Arboretum.

Among a multitude of strange shrubs and trees to be seen on a walk through the section, some of the plants may look familiar to you. This is true because with the onset of rising temperatures of the inter-glacial, a great proportion of woody plants native to central Europe today has re-immigrated into this region from refuges in south-eastern Europe and the Caucasus.