History of the Universitäts-Sternwarte Göttingen 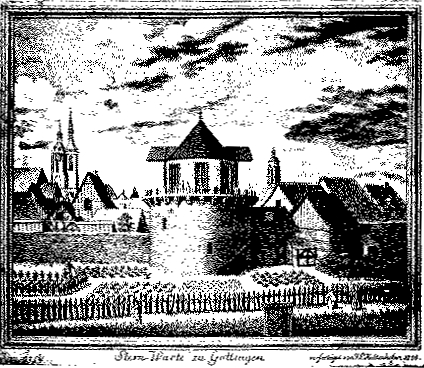 1773 Engraving of the observatory of J.P. Kaltenhofen

The first Observatory in Göttingen was installed in one of the southern city towers in 1750. In 1751, Tobias Mayer (1723-1762) was hired as the first notable astronomer in Göttingen. Mayer's Catalogue of stellar positions with the Bird Quadrant established new standards in precision and scope. His observations and maps of the moon were the best of his time. This etching dates from 1773. Another view of the old Observatory around 1800 is also available. 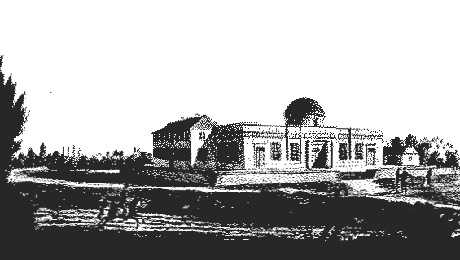 1816 Reproduction of a colored ink drawing by F. Besemann showing the new Observatory building including the adjacent living quarters (unsigned).

The construction of the present observatory building just outside of the city walls started in 1803 under master builder Georg-Heinrich Borheck. The initial funds were provided by King George III of England, but the Napoleanic Wars interrupted the project, and it was finally finished in 1816 under master Justus-Heirich Müller.

In 1807, Carl Friedrich Gauß (1777-1855) was made the first director of the Observatory. At that time, he had already become world-famous for his mathematical and orbital mechanics work. During his tenure as director, he continued to make major advances not only in mathematics and orbital mechanics, but also in observational astronomy, statistics, physics, geodesy, and geophysics. Gauß and Wilhelm Weber (1804-1891) constructed the world's first electrical Telegraph and connected it between the Observatory and a physics building downtown. Gauß continued to teach and do research in the observatory until his death in 1855. Views of the new observatory, showing its classical architectural beauty, are available from 1816, 1826, 1838, and 1840.

After Gauß, Ernst F. Wilhelm Klinkerfues (1827-1884) and Wilhelm Schur (1846-1901) continued the work on positional astronomy. Klinkerfues also studied meteorology: his local weather predictions must have been somewhat inadequate, however, since the locals gave him the nickname "Flunkerkies" (the first half of which means "fibber"). This is the earliest known photograph of the observatory, dating from 1865. Two decades later, the purely architectural central dome was replaced with an astronomical dome housing a 6-inch refractor.

In 1901, the most famous astronomer after Gauß became director of the observatory: Karl Schwarzschild (1873-1916). He is considered to be one of the founding fathers of modern astrophysics, and made major contributions in the fields of instrumentation, optics, relativity, and stellar atmospheres. Schwarzschild left the observatory in 1909 to take a position as director of the Potsdam Observatory.

Between the wars, Johannes Hartmann (1865-1936), Hans Kienle (1895-1975), and Paul ten Bruggencate (1901-1961) firmly established a modern astrophysical tradition in Göttingen. Kienle had the 18-inch astrograph built on the local Hainberg and added to it one of the first commercial Schmidt cameras built by Zeiss. Ten Bruggencate succeeded to build a solar observatory on the Hainberg in 1941 in order to study solar activity.

After WW II, Hans Heinrich Voigt, Rudolf Kippenhahn, and Egon-Horst Schröter led Göttingen and the Observatory to play a major role in revitalizing modern german astronomy and astrophysics. In 1960, the worldwide first Gregory-Coudé solar telescope was installed at the solar observatory near Locarno (South Swizzerland). In 1985, that telescope was transferred to the Observatorio del Teide on the island of Tenerife/Spain after major improvements at the observatory's workshop. More recently, Göttingen has assumed a major role in modern instrumentation.

In June 2005 the research institute has moved into the new building of the faculty for physics and has been renamed into Institute for Astrophysics. 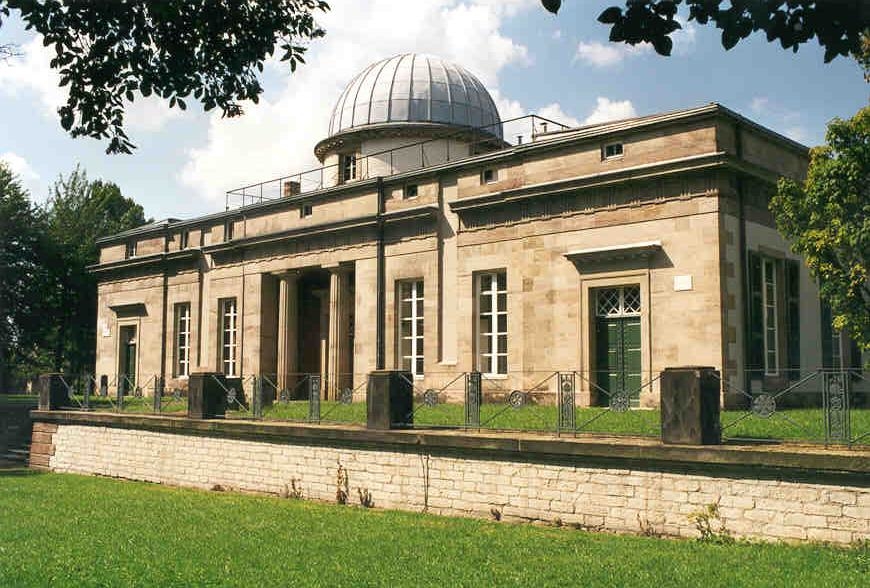 1994 Photograph of the observatory by Rolf Spindler