Flows in the presence of strong radiation fields are typical for astrophysical situations. Their theoretical description and numerical treatment is the subject of 'Computational radiation hydrodynamics'. An example for research in this field is described here.


The envelopes of many luminous stars are characterized by a large contribution of the radiation pressure to the total pressure. Massive primordial stars, massive stars in the Galaxy like the spectacular object η Carinae, and some central stars of planetary nebulae and their progenitors are examples which exhibit this situation. The large fraction of radiation pressure gives rise to violent instabilities, whose mechanism and final result is investigated using a theoretical approach. 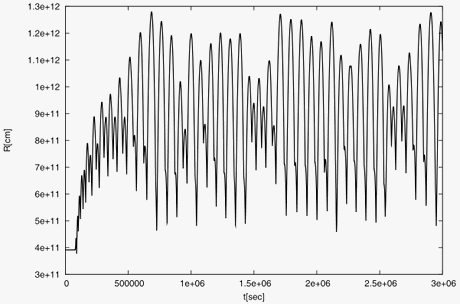 Fig. 1: Stellar radius as a function of time for a massive Wolf-Rayet star (from [2]). A radiation driven instability in the stellar envelope leads to finite amplitude pulsations.

Stellar evolution calculations and the linear stability analysis of the generated stellar models form the basis of the studies. For unstable stellar models the time evolution of the instability is then followed numerically into the nonlinear regime using a radiation hydro code [1] to determine the fate of the corresponding star. Depending on the particular stellar parameters, the instabilties can lead to finite amplitude periodic pulsations (Fig.1) or may show indications of chaotic behaviour. The mechanical energy flux associated with the pulsations turns out to be high enough to drive a stellar wind with significant mass loss rates [2]. Stellar mass loss is fundamental not only for stellar evolution but also for the environment of galaxies, yet it is still a poorly understood phenomenon. Accordingly, the aim of the current studies consists of proving strictly a connection between stellar pulsations and mass loss for the luminous stars considered. Numerically determined mass loss rates will considerably improve not only the understanding of their evolution but will also provide more reliable input for galactic matter circulation.