In 1954 Max Born (1882 to 1970) was awarded the Nobel Prize for Physics (together with Walther Bothe) for his scientific works in quantum mechanics which were primarily developed during his time at Göttingen, particularly for his statistical interpretation of the wave function. From 1904 to 1907 Born studied mathematics, physics and astronomy at the Georg-August-University. Following his habilitation (1909) he initially worked here as Privatdozent [associate professor] before becoming professor for theoretical physics in 1921. In 1933 he emigrated to England. In the year 1957 Max Born, together with Otto Hahn, Carl Friedrich von Weizsäcker and Werner Heisenberg and 15 other renowned scientists, signed the “Göttinger Erklärung” [Declaration of Göttingen]. In it they emphasised the acceptance of socio-political responsibility by scientists and emphatically rejected any German participation in the construction and use of nuclear weapons. 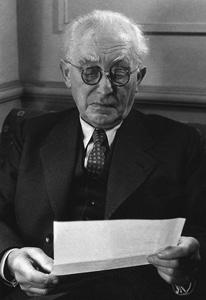