The Cosmopolitan City. Riga as a Global Port and International Capital of Trade (1861-1939)


Riga’s trade in raw materials and agricultural products
In the late 19th and early 20th century, Riga managed to profit to a particular extent from the general upswing in trade between Western Europe and Russia. This was mainly due to its favorable geographic location on the Gulf of Riga: the Riga port was ice-free for a longer period of the year than the capital ports of Saint Petersburg and Kronstadt. Riga also benefited from the expansion of the Russian railroad network. In terms of trade and infrastructure policies, Riga’s institutions, first and foremost the Riga Bourse Committee and the City Council, set the tone for stimulating trade and shipping by promoting modern technology (e.g. refrigerated wagons and a cold storage facility in the Port of Riga). New export products such as eggs or butter supplemented and in some cases replaced previously important export goods.

Zurück Vor
Riga’s trade in raw materials and agricultural products
Trade With Eggs and Butter
At the beginning of the 20th century, technological innovations such as cooling devices in trains and steamships also allowed to transport perishable goods like eggs and butter. In 1902, the London Society Union financed and built a cold store in Riga. By 1906, 59.5 percent of Russia’s butter export and 40.1 percent of Russian eggs were exported through the Riga port. Eggs became Riga’s third most exported good. The maps of Riga’s egg and butter trade created with ArcGIS list the cities with which Riga first established a trade connection between 1903 and 1913 with labels highlighting new trade links in italics. The increase of trade links to cities where Riga exported eggs and butter suggest that these new agricultural products boosted sales. They made a decisive contribution to the consolidation and expansion of trade between western Europe and Riga’s Eurasian hinterland, turning Riga into a port that acted as a link between east and west. The maps of Riga’s egg and butter trade show that eggs and butter were in high demand in western Europe. The German cities of Cologne, Frankfurt and Magdeburg were now connected to the Baltic Sea via a new network of canals. They are marked in italics showing that they became new consumers of Russian eggs or butter in the decade between 1903 and 1913. New suppliers in eastern Russia and Siberia added between 1903 and 1913 included for example Ufa (for eggs) and Irkutsk (for butter).

Riga’s timber trade
In the last three years before the outbreak of World War I, Riga developed into the most important trading center for the overseas timber trade. In the 40 years between 1871 and 1911, the turnover of timber quadrupled. Riga benefited from its natural conditions and its waterways, which had long enabled the inexpensive transport of timber from Livonia and Courland to Riga. River regulation of the Daugava (Düna) and canal projects such as the construction of the Gauja-Baltezers Canal, completed in 1903, connected the Gauja (Livonian Aa) with the Daugava (Düna) through Baltezers and facilitated the export of timber from the Baltic hinterland. As the ArcGIS map of Riga’s timber trade shows, waterway transport played a major role in the shipment of timber, including its imports to Riga (shown in yellow): Timber reached Riga by raft, where it was processed and finally exported by ship. Riga’s numerous waterways, the Daugava (Düna) and tributaries as well as the Kisch Lake (Lat. Ķīsezers, Germ. Stintsee), provided sufficient parking space for rafts with timber waiting to be processed. In addition, the Riga port became a transfer point for Russian timber, which was transported by waterway or by rail to Riga and from there shipped to Western Europe as well as overseas. Riga merchants were constantly working on expanding their trade network. In 1912, Riga even started to export wood veneer to Australia and New Zealand. The main items of Riga’s timber export were boards and sleepers, i.e. cut or processed timber, which also benefited Riga’s numerous sawmills. At the same time, the timber trade, sawmills and the wood processing industry in general were businesses where Riga’s different nationalities were all well represented. Next to Baltic Germans, Latvians, Jews, Russians, and Poles were likewise active in the timber business. 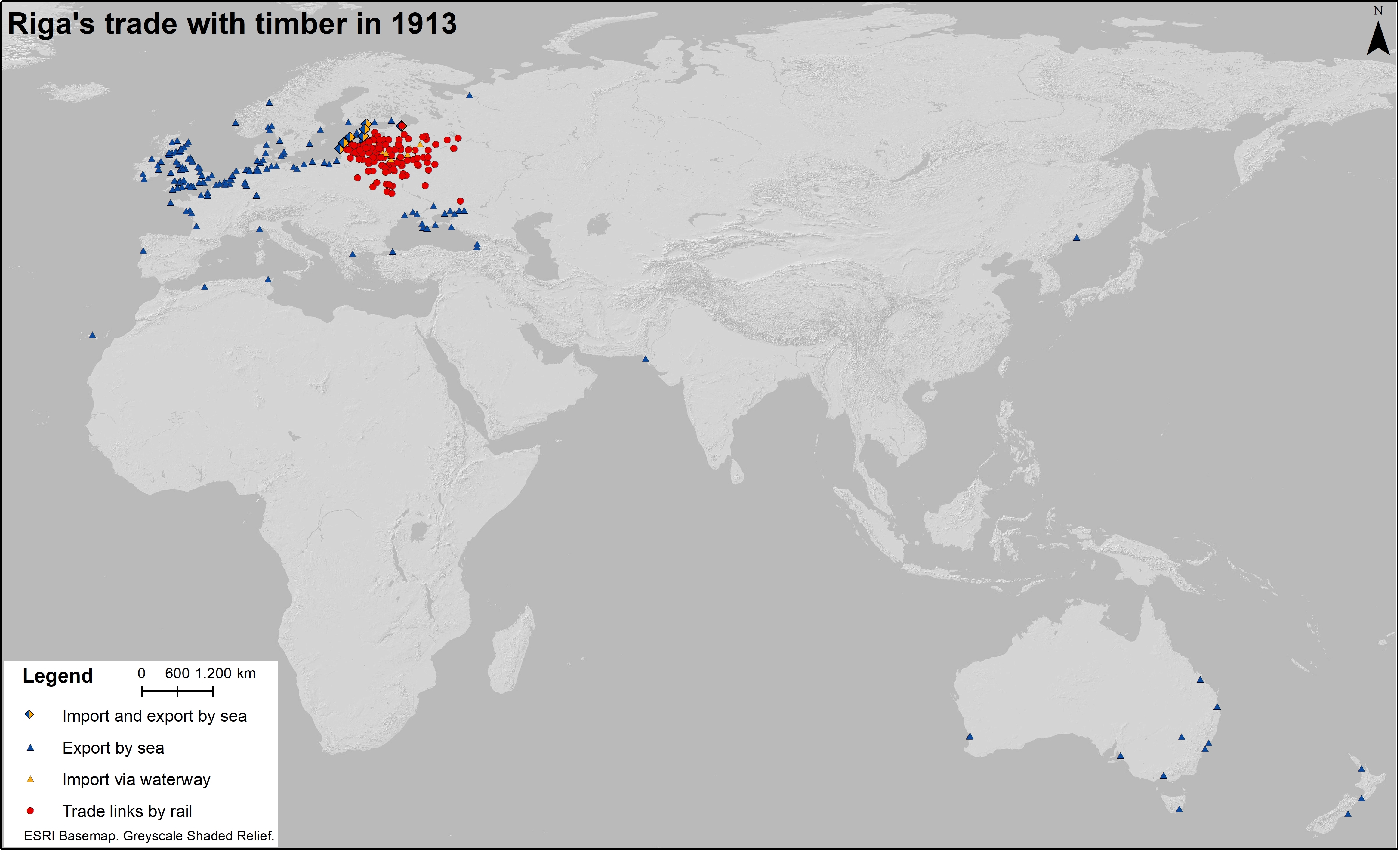 Riga’s trade in grain and flax
Grain and flax had been among the main export goods of the Riga port since the medieval period. Due to the expansion of the Russian railroad network and Riga’s new connection to the southern Russian black earth region – the Riga-Zarizyn (Volgograd) railroad opened in 1871 – the grain trade experienced a brief heyday in the 1870s. However, in the period between 1883 and 1913, Riga suffered setbacks regarding the export volumes of grain. This was mainly due to a general increase in Western European tariffs on Russian grain and the German-Russian trade war, which reached its peak in 1893 resulting in maximum tariffs of up to 50%. After the conclusion of the German-Russian trade treaty in 1894 and the normalization of customs duties, Riga had to compete in the grain trade with the German Baltic Sea ports of Memel, Königsberg, Danzig and Stettin. Therefore, grain as an export commodity became increasingly less important. The trade in flax, which, like grain, had also been one of Riga’s traditional export commodities, experienced an upswing in the late 19th and early 20th century. Rigan flax exporters sold not only Livonian and Curonian flax from the Baltic provinces, which were already well established on the world market; subject of trade was also flax from the Russian hinterland, which accounted for 75% of the flax traded in Riga before World War I. In 1913, 50.5 percent of Russian flax was exported through the Riga port.