Step in the Future Concept: Networking and internationalisation instrument

The Georgia Augusta has opened its first foreign representation: it is based on the Campus of the University of Pune in India. The Prime Minister of the State of Lower Saxony Christian Wulff and the Minister for Science and Culture of Lower Saxony Lutz Stratmann participated in the opening celebrations on the 4th of October 2008. The foreign representations – after Pune further representations will be opened in Nanjing and Seoul – are central instruments of internationalisation and networking as part of Göttingen’s Future Concept.

As outlined by the University President Prof. Dr. Kurt von Figura, collaborations already exist in various areas of the humanities and social sciences as well as in the natural sciences. Opportunities for cooperation can found in chemistry which is particularly strong at Pune as well as biotechnology and physics, in addition to agriculture, forestry, geosciences and social sciences in connection with questions on biodiversity and rural development.

Additionally the Georgia Augusta is planning the establishment of a Centre for Modern Indian Studies which will investigate India’s societal and economic change as well as multi-religious and multi-ethnic correlations. Minister Stratmann assured the emphatic support of this concept. During the opening celebration Minister Wulff referred to the great potential of the business location Pune with an intensive cooperation between businesses and university.

The Foreign representations are important steps of the Future Concept-based project “Göttingen International” which is realised with funds from the Excellence Initiative. The Science Minister of Lower Saxony will also take part in the opening events in the Chinese city of Nanjing (10th of October 2008) and in the South Korean capital Seoul (29th of November 2008). 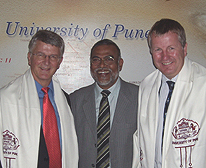