Environment friendly sterile insect technique (SIT) is being applied effectively as a component of area-wide integrated pest management (AW-IPM) for Ceratitis capitata since 1970s. Nevertheless improved biological strategies are needed to increase the efficacy of AW-IPM. Transgenic approaches should increase and widen the applicability of such programmes to different pest species. In this respect we are following up two major strategies:

An approach to cause sterility was designed without interfering with spermatogenesis to maintain males and their sperm as competitive as possible. We followed a strategy, which is based on the expression of a lethal factor under the control of a promoter that is active at early blastoderm stages. If the male has been homozygous for the combination of the necessary gene constructs, each fertilization event will lead to embryonic lethality. The advantage of this system lies in the proposed high competitiveness of such males, since their reproductive organs will not be affected and matings actually lead to sperm transfer. However, it will be very important that the promoter is active only in early stages of development. Then the lethal phase can be overcome while developing under permissive conditions in the rearing facilities, whereas after release non-permissive conditions will not affect the males themselves but only their progeny.
The system employs the ectopic expression of a hyperactive proapoptotic gene that causes embryo-specific lethality when driven by the tetracycline-controlled transactivator tTA under the regulation of a cellularization gene enhancer/promoter. The system has been tested successfully in Drosophila melanogaster (Horn & Wimmer 2003). We want to transfer the system to Ceratitis to evaluate it in comparison with the effective conventional SIT using radiation-induced sterility.
We tried the direct transfer of the Drosophila system to Ceratitis capitata by injecting the respective constructs that carry Drosophila-derived promoters. We got transgenics, but none of them expressed the tTA transgene. So the cellularization specific promoters from Drosophila seem not functional in Ceratitis. To obtain Ceratitis genes which are specifically expressed at the blastoderm stage, we carried out PCR-based cDNA subtractions of different embryonic stages and identified thereby several cellularization specific genes (Schetelig et al. 2007). We isolated the corresponding enhancers/promoters and subsequently brought the tTA independently under the control of each enhancer/promoter region and injected the constructs in Ceratitis capitata.

We have engineered two lines each with a green and a red fluorescent marker. One marker is under the control of the sperm specific ß2-tubulin promoter from Ceratitis capitata (turboGFP or DsRedExpress); the second is under the control of the polyubiquitin promoter of Drosophila melanogaster (DsRed or EGFP). ß2-tubulin is transcribed selectively during spermatogenesis. Released males from these strains could be distinguished from wildtype males in the monitoring process during SIT. In addition monitoring of the mating success of sterile released males by trapping females and examine their spermathecae is possible with these strains. With this knowledge releasing strategies in SIT-based AW-IPM could be optimized.
In principle these strains can also be used as sexing lines that could be sorted automatically for males and females in larval development. However, since Ceratitis already has an effective sexing strain, this might be more important for the development of SIT in other Tephritids. 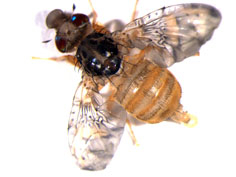 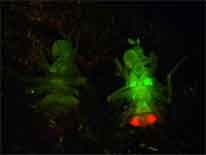