We cordially invite you to the International Symposium Childhood and Adolescence in Anglo-Saxon England which will take place at the Universtiy of Göttingen on June 20th, 2014. .


During the past decades the field of gender studies has led to some rigorous scholarly scrutiny of the lives and roles of fully-grown men and women in Anglo-Saxon England. Conversely, however, the Anglo-Saxon child has received relatively little attention. This conference on Anglo-Saxon childhood and adolescence aims to redress this scholarly neglect. Adopting various approaches, and not limited to any one theoretical agenda, this meeting intends to stage a lively debate exclusively dedicated to childhood and adolescence in Anglo-Saxon literary culture. To date, scholarship on this topic has been mainly confined to studies focusing on historical and archaeological evidence, the most substantial of which is Sally Crawford's Childhood in Anglo-Saxon England, published in 1999. Our speakers have taken into account new advances in historical and archaeological research, while also bringing to bear many other kinds of evidence such as linguistic, literary, onomastic and palaeographical. The primary aim of the symposium is to offer, through a wide range of materials and approaches, a significant insight into how conceptions of childhood and adolescence manifested in Anglo-Saxon society.


Drawing its evidence from areas as diverse as historiography, onomastics, law, education, hagiography and preaching, poetry, literary theory, archaeology and palaeography, the symposium will break new ground in its consideration of how childhood and adolescence were conceptualised in Anglo-Saxon England. It will demonstrate that representations of childhood and adolescence in the literature of this period rebut the idea of 'rediscovered childhood' as a sixteenth-century concept, as proposed by Ariès. It will reassess the notion of the early medieval child as 'miniature adult' (Greenleaf) and the widespread assumption that a 'severe treatment of children . . . typifies the Anglo-Saxon attitude towards them' (Kuefler). Its wide spectrum will enable a rigorous interrogation of such issues as the expectations placed in the new-born child; the rhetoric of helplessness and innocence connected with children; fostering as social obligation and the specific social roles of monks as teachers and foster-parents; child exploitation and abuse; genealogical pressure and incest; and children's rights, their liability and punishment, their reaching of adulthood and majority, as well as their omnipresent mortality.


If you are planning to attend the conference please let us know in advance so that we can make the necessary preparations. Please contact Andreas Lemke by 8 June 2014.


For a prospective programme of the symposium klick here. 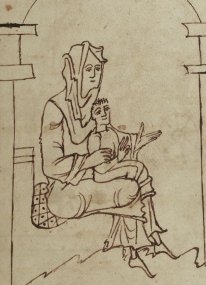 Register for the Symposium