If you bring your family to Göttingen and need to know more about schools in and around Göttingen, here is some general information in advance:

School attendance is mandatory for all children in Germany between 6 and 15 years of age. Home schooling is not permitted.
The school year usually starts in August or early September and ends in June or July. The actual dates vary from year to year. Summer break lasts about six weeks, with further holiday periods of varying length in autumn, around Christmas, and in spring. Virtually all German schools are half-day and offer classes in the morning only. From grade 5 and on, classes usually run from about 8 am to 1 pm. Older children sometimes also have classes in the afternoon.

Usually, children in Germany start their first school year at the age of 6. They go to Grundschule (elementary school) for four years, gaining basic skills such as reading, writing, and basic mathematics. After four years, depending on their performance, they go to Hauptschule (low-level secondary school, additional five years), Realschule (medium-level secondary school, additional six years), or Gymnasium (high-level secondary school, additional eight to nine years). The ‘Abitur’ qualifies for the admission to universities and can only be obtained from a Gymnasium. However, if a student has good performance in Hauptschule, he/she may change to Realschule or even to Gymnasium during his/her studies.
Comprehensive schools (Gesamtschule, from 5th grade and on) combine various types of the schools listed above. Göttingen has two Gesamtschulen: Georg-Christoph-Lichtenberg-Gesamtschule and Geschwister-Scholl-Gesamtschule.

Public schools (which represent the vast majority) are run by the government do not take tuition fees. In addition, there are a small number of private schools in Göttingen, such as the Bonifatius Schule (run by the Catholic Church), a Montessori school and a Waldorf school. Some schools offer “Vorklassen” for children at the age of 5 to prepare them for school life and to encourage and stimulate them. In cases where successful attendance of the first school year cannot be expected, children of the age 6 have the possibility to attend the “Schulkindergarten”. There they receive special support to improve their abilities and skills in order to be admitted to school in the next school year. Before children enter elementary school, they have to pass a mandatory language test. If the child does not pass this "Test zur Feststellung des Sprachförderbedarfs", he or she gets special language courses which should make sure that he or she can follow the German instructions of the teacher in grade 1.

Languages
The general language of instruction is German, with language classes ideally taught in the subject language (except languages such as Latin and ancient Greek). During their third school year, children begin to learn English. Later, they have the opportunity to learn further foreign languages, such as Latin, French, or other Romance languages. Moreover, it is becoming increasingly common to learn languages such as Russian or Chinese as a third language. 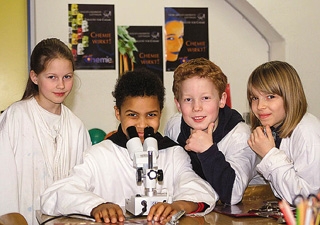