While the first plants in the garden are already finishing their flowering season, most trees and shrubs are now preparing for the annual competition for the most beautiful flowers and the richest colours.

Bearing bright- to deeply golden-yellow flowers wild Forsythia species and hybrids are overwhelming the foxholes in the Forest Botanical Garden. The original cultivar, by the way, that all modern cultural hybrids of Forsythia x intermedia are based upon was cultivated by the first master gardener of the Forest Botanical Garden in Hannoversch Münden in 1878. Around the refuge the white flowerage of Magnolia x loebneri unfolds under frost-free conditions.

The first half of April, depending on weather conditions, sets the stage for the first, paramount flowering of many wild Cherries and cultivars thereof. The garden is drowned in a sea of brilliant white, delicate or shocking pink. Succeeding the Cherries, wild and cultivated Apples start flowering in the first half of May, apparently trying to outmatch the Cherry blossom. Also the fragrant Lilac, Mock-orange, and Genista species are a highlight of their own, flowering at the same time as the Horse Chestnut. 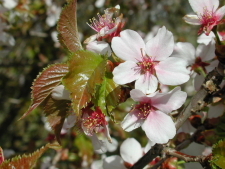 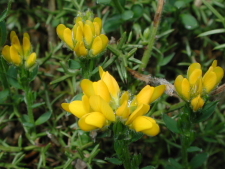 Flowers of Spruces, Firs, and Larches are noticed chiefly because of the high pollen count coming along with them. Only the observant visitor will recognize the beauty of these flowers, appearing in pink and red up to dark-purple colours: not only are most flowering cones situated too far up in the crown, but also lack the flowers conspicuously sized petals.

Wild Roses and Kolkwitzia species, the latter bearing a pink veils of fragrant flowers, mark the end of the spring-flowering season, while the very last spring-flowering plants accompany the transition from spring to summer: Smallflower Tamarisk (Tamarix parviflora), having minute, delicately pink flowers on widely projecting branches, and the Tulip Tree (Liriodendron tulipifera). 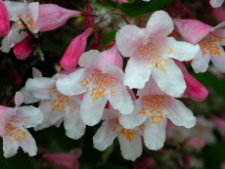 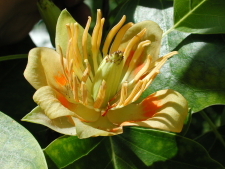 Many trees and shrubs in the garden are accompanied by easy-care, shade-tolerant herbaceous perennials. In spring especially Lungworts such as Common Lungwort (Pulmonaria officinalis) and Red Lungwort (P. rubra), Hellebores such as Stinking Hellebore (Helleborus foetidus) and Lenten Hellebore (H. orientalis), and Epimedium rubra catch the visitor’s eye within the unobstructed fringe around trees and shrubs.

Peony lovers will find a host of wild species of this genus, both shrubs and herbaceous perennials. 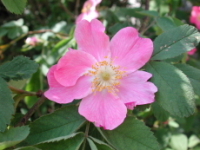