Professor Stefan W. Hell of the Max Planck Institute for Biophysical Chemistry in Göttingen has won the 2014 Nobel Prize in Chemistry. He shares the prize with his US-American colleagues Eric Betzig and William E. Moerner. With this award, the Royal Swedish Academy of Sciences honours the physicist's pioneering work in the field of ultra-high resolution fluorescence microscopy. Stefan Hell succeeded in radically overcoming the resolution limit of conventional optical microscopes - a breakthrough that has enabled new ground-breaking discoveries in biological and medical research.

Since 1997, Hell has been conducting his research at the Max Planck Institute for Biophysical Chemistry in Göttingen, as head of the Department of NanoBiophotonics since 2002. Hell was named Honorary Professor at the Faculty of Physics in 2004 and also collaborates closely with the Faculty of Chemistry. He is involved in numerous research projects with scientists and researchers at Göttingen University and the University Medical Centre Göttingen (UMG). For example, he is project manager at the Collaborative Research Centre (SFB) 755 "Nanoscale Photonic Imaging" and SFB 1002 "Modulatory Units in Heart Failure". Hell is also a board member of the Cluster of Excellence "Nanoscale Microscopy and Molecular Physiology of the Brain" (CNMPB) and acts as one of its spokespersons.

In addition, Hell is particularly active in promoting young researchers and scientists at joint graduate schools on the Göttingen Campus, among others. Stefan Hell is also involved in the Georg August University Graduate School of Science (GAUSS), an umbrella organisation that combines PhD degree programmes in the natural sciences. Said organisation is also home to the Göttingen Graduate School for Neurosciences, Biophysics and Molecular Biosciences (GGNB), of which Stefan Hell is also a member. The GGNB is supported by the Excellence Initiative.

Professor Hell is also a Scientific Member of the Max Planck Society, as well as head of the Department of Optical Nanoscopy at the German Cancer Research Centre in Heidelberg. He has received numerous awards for his achievements, most recently with the Kavli Prize in Nanoscience (2014). 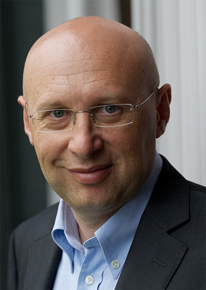