In 1932 Werner Heisenberg (1901 to 1976) was awarded the Nobel Prize for Physics for his work on the explanation of quantum mechanics. Heisenberg studied physics, mathematics, chemistry and astronomy in Munich and Göttingen. The assistant of Max Born habilitated here in 1924 and subsequently worked as Privatdozent [associate professor] for theoretical physics. In 1927 he was appointed professor at the University of Leipzig, later he conducted research in Berlin and took part in the secret German uranium project. From 1946 to 1958 Heisenberg returned to Göttingen where he became honorary professor and director of the Max-Planck-Institute for Physics. Here he presented his “Unitary Theory of Elementary Particles” in 1958, which became known as “Theory of Everything”. One year previously he signed the “Göttingen Declaration” in which renowned scientists emphasised the acceptance of socio-political responsibility by scientists and emphatically rejected any German participation in the construction and use of nuclear weapons. 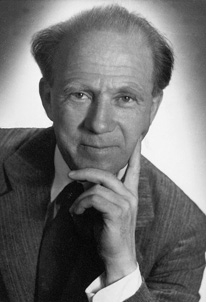