Conference: Frames and Framing in Antiquity

Frames and framing have entered the public discourse already before covid-19 but have recently become a hotly debated issue due to the styling of news, for instance in social media, that partly replace other possibilities of social communication at the moment. Based on models from the field of sociology, psychology and communication studies, "frames" describe how people unterstand, react to, and are influenced by situations and activities (frame analysis). The phenomenon of "framing" assesses how individuals or institutions might use, modify, or challenge existing frameworks by creating new frames, or add new slots and fillers to common frames. Thus, the concept of framing is a useful tool for a broad range of disciplines since communication is viewed as a complex entanglement of sender, receiver and medium and their related frames and not as a one-directional process of sending information from A to B.

In recent years, frame analysis has also gained attention in the field of ancient studies, particularly in ancient history and linguistics as well as classical archaeology with a specific focus on visual studies. However, the model's full potential is yet to be exploited as it is still not comprehensively tested against the various ancient sources. Hence, the conference attempts to fill this obvious gap by assessing the theoretical tool-set as well as the application of such models to case-studies.

The dimensions of frame and framing models will be discussed in five panels, with each paper lasting 5-7 minutes followed by a respondent and an open question slot:

The key-note speech will be given by Professor Hartmut Leppin (University of Frankfurt) on the concept of parrhesia ("free speech") in antiquity.

We warmly welcome participants to register under: Sven Günther to receive the link to the online platform (Zoom) and further information as well as abstracts of the conference papers.

14.20-14.45
OPENING REMARKS
Elisabeth Günther (Institute for Digital Humanities, University of Göttingen)
How to understand an owl in armor: frames and framings in ancient studies

14.45-16.00
KEY-NOTE LECTURE
Hartmut Leppin (University of Frankfurt)
Parrhesia and the framing of exspectations in the social worlds of antiquity

9.00-9.30
Martina Sauer (Institute of Image and Cultural Philosophy, Bühl)
Promise of happiness, security and community - frames and framing in a new light

10.15-10.45
Sven-Philipp Brandt (Special Collection "Amploniana", University of Erfurt)
Sustainability as a framework? The concept of αὐτάρκεια in late classical Athens

11.15-11.45
Guendalina Taietti (University of Liverpool)
Framing the Macedonians, becoming Greek: on the importance of Ancient Macedon in the nation-making of the Hellenic state

14.00-14.30
Ben White (University of Nottingham)
Porticus, keys, and brackets: towards a Goffmanian framework for exploring the colonnades of ancient Rome


An abstract you can find here. 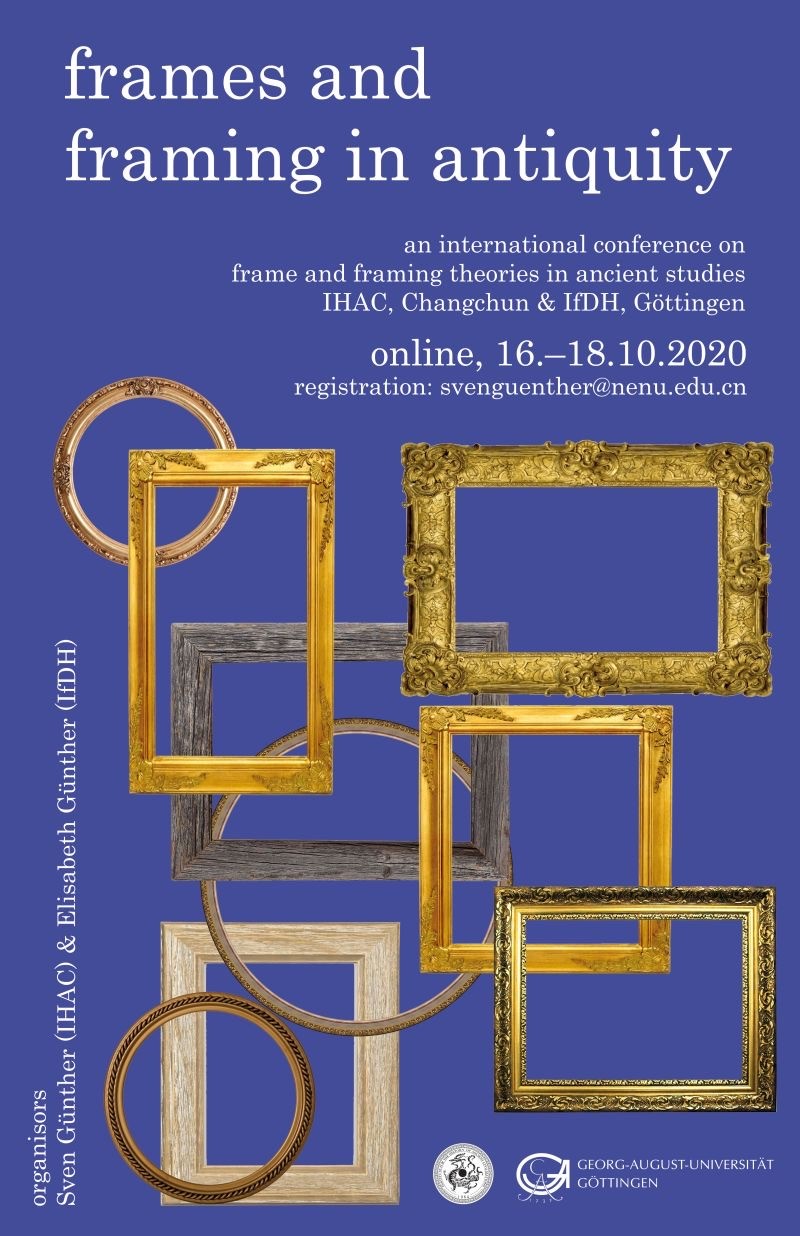