Formaldehyde is one of the most thoroughly spectroscopically characterized polyatomic molecules. It is an important interstage product in heterogeneous catalysis and is formed by partial oxidation of methanol on silver or iron oxide substrates. Its electron affinity is -0.65 eV and lies between the values of NO (0.03 eV) and CO (-1.0 eV); two molecules, whose surface dynamics are governed by electronically non-adiabatic interactions. As the LUMO of formaldehyde is predominately located at the CO bond, electron transfer to the molecule would predominantly excite the CO stretch vibration. Comparison with excitation of other vibrational modes allows to distinguish between energy transfer channels including and excluding electron transfer.

We use a classical molecular beam surface scattering machine for scattering formaldehyde from different surfaces. For formahldehyde detection we use a 1+1' REMPI scheme employing a dye laser (360nm) and an excimer laser (157 nm). 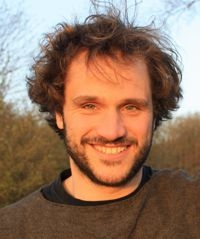