The formation of the solar system and the transition of the young Earth from a hostile ball of molten rock into a calm and habitable planet more than 4 billion years ago remain two of the biggest scientific enigmas. The study of chemical and physical processes that operated during this crucial time period is demanding due to the paucity of suitable samples that have survived the continuous solar and planetary reworking processes since then. Only recently have we began to unravel some essential paradigms of Earth and solar system formation. The research carried out at the Department of Isotope Geology is at the heart of an international effort of exploring this still uncharted planetary epoch. We develop and apply some of the most sophisticated analytical techniques presently available to unravel fundamental questions, such as: (a) what is the chemical composition of bulk Earth, (b) how did the Earth, the Moon and the terrestrial planets accrete and differentiate into their shell-like structure comprising core, mantle and crust, (c) what was the impact of late accretion processes on the terrestrial budget of volatile elements, (d) what caused the observed chemical heterogeneities in the Earth´s mantle and (e) when and how did the first continental crust form in the early Archaean?
Planetary formation processes
Understanding the physical and chemical processes that operated on the early Earth provides the basic framework for all planetary formation and evolution models. Yet, widespread tectonic processes over geological timescales have destroyed any remnants of early terrestrial crust. This makes the investigation of early Earth processes a daunting task flawed by large uncertainties. To circumvent these problems, we apply a series of novel and sophisticated isotope and trace element systems (such as radiogenic W, mass-independent Mo isotopes, high-precision trace element data). 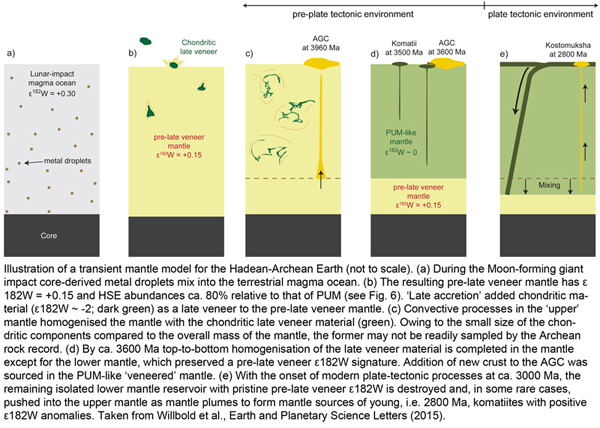 Chemical structure of the Earth´s mantle
The unique chemical and isotopic heterogeneity of the Earth´s mantle is the result of continued crustal recycling at convergent plate margins over billions of years. Identifying the type and chemical composition of recycled components is therefore crucial to our understanding of the structure and geodynamical evolution of the mantle. We employ of a series of high-precision chemical and isotopic tracers, such as radiogenic Sr, Nd, Hf and Pb isotope, stable Mo and trace element data. By this we characterise the chemical and isotopic inventory of different mantle components and draw conclusions about their origin. 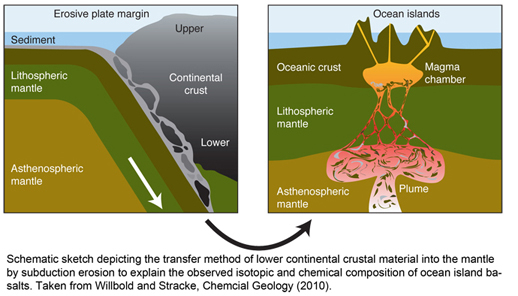 Formation of the Archaean continental crust
The continents represent the essential platform for the development and evolution of terrestrial life. Yet, the geological processes that generated the first continental crust are still highly debated. In particular, two contrasting views have emerged over the past decades: (1) assuming formation of Archaean continental crust in ancient subduction zones or (2) assuming a non-uniformitarian view of crust formation in geodynamic regime dominated by a mantle-plumes. Key here is to decipher the origin of the characteristic chemical traits of the early Archaean continental crust and compare them with those observed in modern tectonic environment. An important modern analogue of plume-related crust formation is Iceland. This unique setting allows us to investigate and understand the magmatic processes that created trace element distribution patterns that are distinctly similar to that found in rocks from subduction zones. 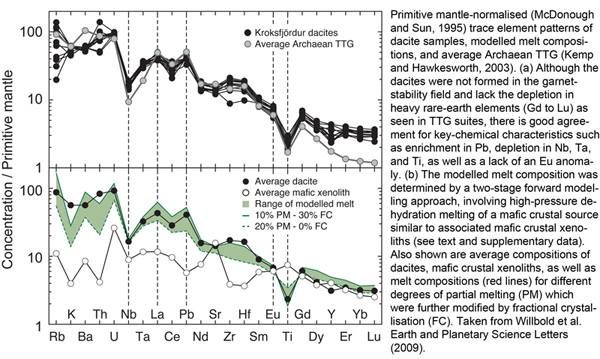 Development of geoanalytical methods
Recent technical improvements in mass spectrometric techniques have open up multiple opportunities to follow new research directions in Earth and Planetary Sciences. Over the last ten years, we have been leading in conceiving, testing and implementing new geoanalytical methods. Such customised and fit-for-purpose applications allow us to take full advantage of these new developments and to tackle these new questions.