Migration and Regimes of Migration Control:
A Regional Comparison 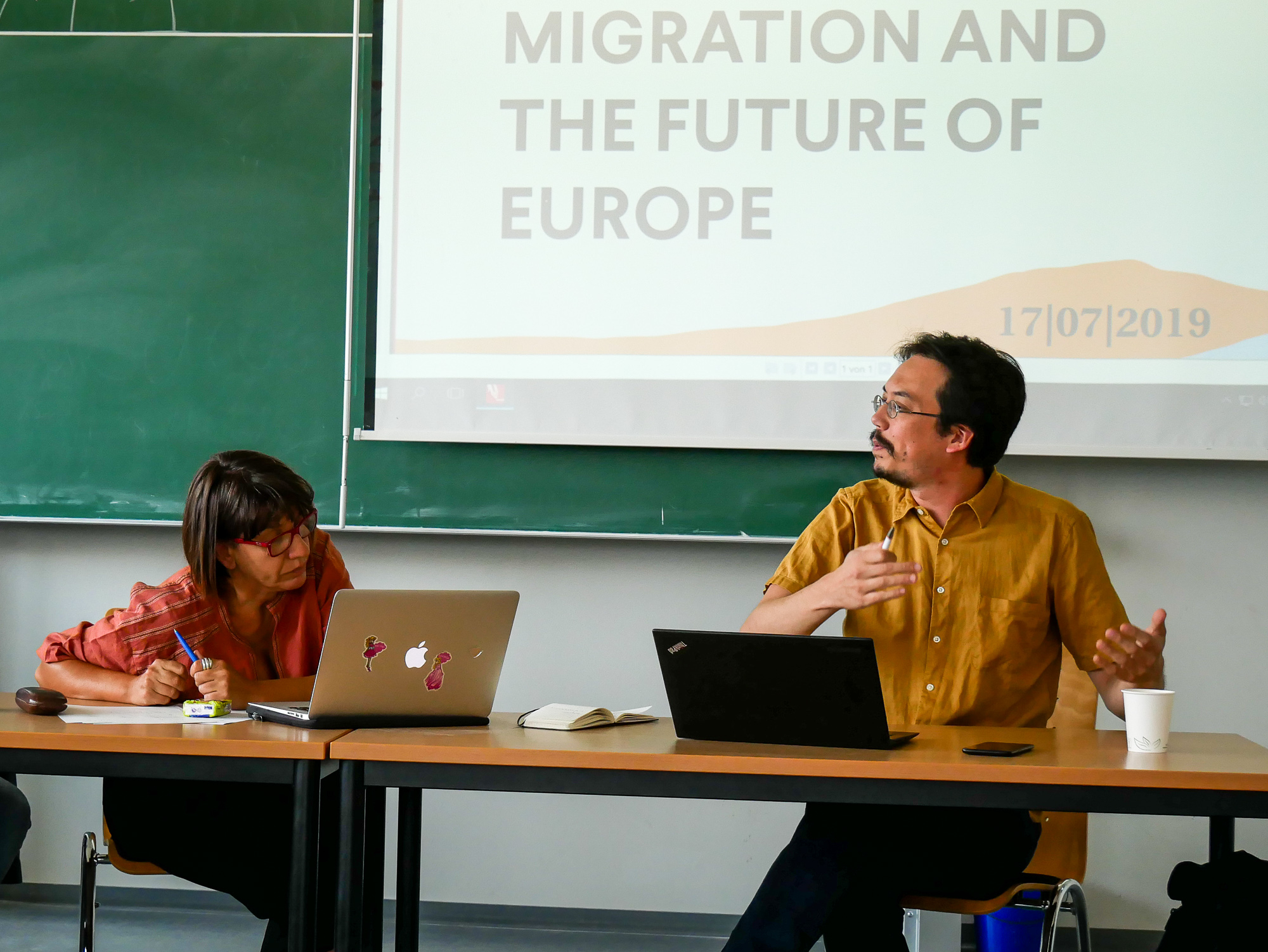 22 May, 16.15 - 17.45, VG 4.102
Jin-Heon Jung (Institute of Korean Studies, Freie Universität Berlin)
Transnational Migration and Religious Conversion among North Korean Refugee-Migrants across Continents in Comparative Perspective Abstract
This talk examines North Korean refugee-migrants' religious encounters throughout their transnational migrations by way of China to South Korea, North America, and Europe in comparative perspectives. It investigates how some of them become voluntarily or involuntarily converted to Christianity, and ordained as professional missionaries, while others are indifferent, critical to, or disenchanted from the religion in the contexts of both national division and their host societies. Their conversion to Christianity is often depicted as a signifier of a sacred triumph over the "evil" socialist North in evangelical political discourses. Such evangelical churches and missionary networks have provided secret shelters, broker-missionaries, and the "Underground railways" in China and Southeast Asian countries to South Korea and other western countries. Overseas Korean ethnic churches serve for the individual refugees to resettle in the host society and the co-ethnic community. Based on more than a decade long follow-up research among North Korean refugee-migrants in different countries, this talk aims to discuss the ways in which North Korean converted Christians develop and practice their own religiosities in the context of transnational migration and in envisioning post-division Korea. It sheds light on religion as a lens through which one can better understand how North Korean refugee-migrants negotiate senses of belonging and further claim to become "the chosen" rather than "helpless victims" in both secular and sacred terms. Moreover, this talk analyzes the similarities and differences in practicing religiosities and the implications among North Korean communities in Germany, England, South Korea, and North America respectively.

29 May, 16.15 - 17.45, VG 4.102
Giovanni Bettini* (Lancaster Environment Centre, Lancaster University)
And Yet It Moves! (Climate) Migration as Symptom in the Anthropocene
Abstract
How will climate change intersect with human mobility? This is a question with crucial implications, not least for those concerned with climate justice. However, ‘climate migration’ is often discussed through simplistic narratives. In particular, the spectre of environmentally-induced exodus recurs in academic, media, policy and activist circles, in spite of numerous studies revealing the empirical flaws and noxious normative implications of such narratives. Why is that the case, and what are the implications? To answer such questions, this talk provides a critical introduction to climate migration, contextualising the matter in relation to broader debates on the Anthropocene. Secondly, we will do a ‘symptomatic reading’ of discourses on climate migration, problematising the normative grounds of current discourses (which are often depoliticizing, securitising and racializing the nexus) and discussing why concepts such as ‘climate refugees’ do more harm than good for those aiming to tackle climate change in equitable ways.

05 June, 16.15 - 17.45, VG 4.102
In cooperation with the Department of Political Science:
Rainer Bauböck (Lichtenberg-Kolleg Göttingen)
Immigration as a Challenge for Liberal Democracies

12 June, 16.15 - 17.45, VG 4.102
Jean-Pierre Cassarino (European Interdisciplinary Studies Department, College of Europe I Natolin Campus Warsaw)
A World of Expulsions: What Lies Behind?
Abstract
For many decades, interstate cooperation on the deportation of irregular migrants has been intensified by means of bilateral readmission agreements concluded between the EU and its member states, on the one hand, and third countries, on the other. These standard and non-standard agreements form a real system. Today, this system links numerous countries whether these are poor or rich, large or small, conflict-ridden or not, democratically organized or authoritarian. Beyond this consideration, it is necessary to question the functions of this expanding and powerfully inclusive system in order to understand its implications for the rights of migrants and non-migrants alike.

03 July, 16.15 - 17.45, VG 4.102
Suresh Canagarajah (Department of English, Pennsylvania State University)
Global Skilled Migration and Neoliberal Language Regimes
Abstract
Contemporary economic and production relationships have led to professionals from the geopolitical South migrating to developed communities for education and employment. From being perceived as “brain drain,” leading to the impoverishment of the periphery, skilled migration is being perceived as “brain gain” or “brain circulation,” leading to a win-win situation for both the North and the South. Skilled migrants send remittances that aid development; provide venture capital to start new companies; outsource work to their home countries; consult for free on technical knowhow; mentor home country professionals; disseminate talent and knowledge by returning home or shuttling between home and abroad; and set up new strategic directions for existing development ventures, or identify new opportunities for expansion. Because skilled migrants are able to make a better connection between outside knowledge/resources and local needs and conditions, this form of development is considered more effective than the traditional approach of NGOs sending aid for development. Skilled migration fits into the neoliberal agendas of the “Washington consensus” for socioeconomic development.
To enhance the benefits from skilled migration, many countries are now emphasizing the teaching of English in their educational institutions. Language competence fits into the human capital valued for flexible and mobile market and labor relationships. In a research conducted on the language attitudes and practices of skilled migrants from Africa in UK, USA, South Africa, and Australia, my collaborators and I contest this neoliberal language regime. The study showed the need to reconsider the glorified status of English in national policies of both sending and receiving countries. It revealed that skilled migrants adopted multilingual repertoires as they navigated professional contexts and home communities for work and development. I label this a “translingual orientation” that contests the treatment of languages as segregated and self-contained. This orientation treats language learning and use as inter-related and succeeding through performance strategies, situational resources, and social negotiations in fluid communicative contexts. Proficiency is therefore treated as practice-based, adaptive, and emergent. However, neoliberal agencies also value language repertoires for profit-making purposes. I label such instrumental use of languages for neoliberal agendas as “reductive transligualism” and distinguish the resistant uses of migrant workers as “expansive translingualism.” The study suggests that we have to go beyond human-capital perspectives and value the many tacit competences and dispositions skilled migrants successfully use to negotiate the communicative challenges for more ethical and holistic socioeconomic development.
10 July, 16.15 - 17.45, VG 4.102
German Caruso (World Bank)
Spillover Effects of the Venezuelan Crisis: Migration Impacts in Colombia Abstract
In the wake of the Venezuelan crisis, Colombian migrants are gradually returning to their place of birth. Since 2016, however, there has been a massive spike of immigration to Colombia attributable to inflows of the Venezuelan-born. Using high-frequency administrative data, we estimate the impacts of the recent labor supply shock-driven by the economic predicament in Venezuela-on the employment, income, and poverty outcomes of native Colombians. We employ an instrumental variables approach to account for the selection of immigrants into locations with more or less desirable employment conditions and amenities. Conservative estimates indicate a 1-percent increase in immigration from Venezuela causes a 3-percent average wage decline in host communities. Focusing on the immigration of the Venezuelan-born alone, wage effects rise to 5 percent, increasing poverty rates 2 percentage points. A dual-pronged approach is warranted to promote the economic assimilation of Venezuelans while protecting the job securitiy of Colombians.
17 July, 16.15 - 17.45, VG 4.102
In cooperation with: Euroculture; Urban Lab: Migration Moves Göttingen;
Stiftung Adam von Trott; Seebrücke Göttingen

Sponsored by: Federal Government Commissioner for Culture and Media

Migration and the Future of Europe Abstract
In the aftermath of the European election in May 2019 this panel discussion sheds light on the role of migration in the European (des)integration process and in the reconfiguration of Europe’s borders and citizenship. Migration scholars and practitioners debate Europe’s struggle to (commonly) respond to the challenges and opportunities of global migration processes: What role has migration played in the election campaigns? Considering migration politics how are national or party coalitions changing? What shift and continuities are there in Europe’s border regime and migration control practices? What are recent and possible future amendments to asylum law?
* via video conference 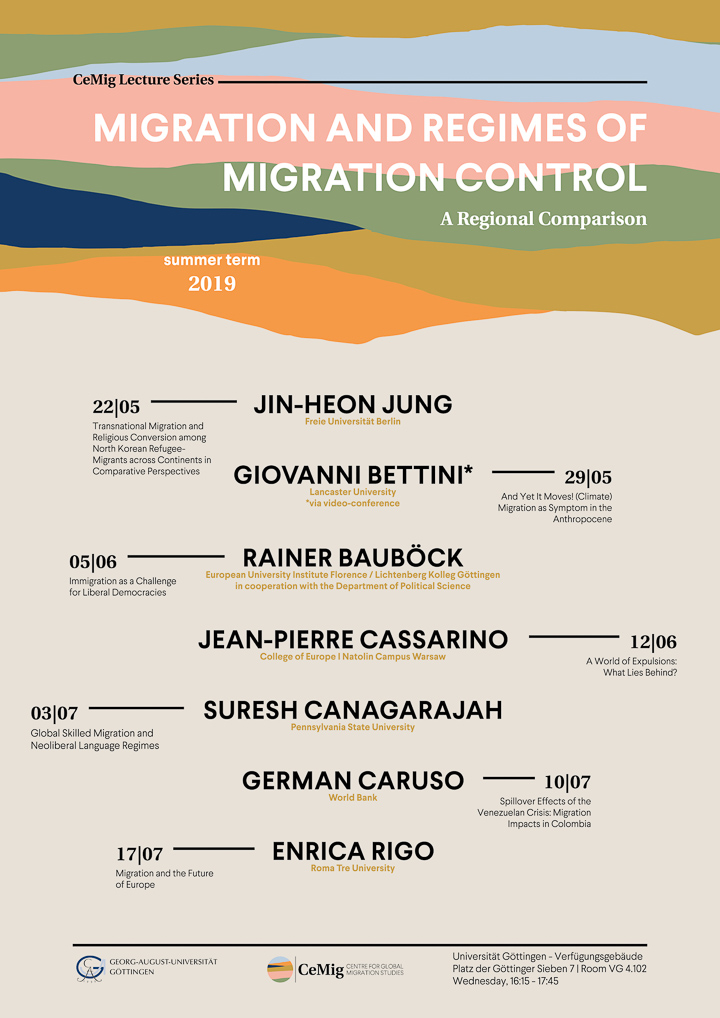