The Theology Stift is the fourth oldest establishment of Georg-August-University Göttingen. It goes back to “collegium theologicum repetentium,” which was founded in the year 1765, and was furnished both for the promotion of the students and for the scientific new generation.

Out of the Repetenteninstitut came well known figures such as Johann Philipp Gabler (1753-1826), a professor of theology in Jena, the Orientalist Heinrich Erwald (1803-1875), who had extraordinary linguistic skills and whose Hebrew and Arabic grammer books spread widely. Gerhard Uhlhorn (1826-1901), was one of the founding fathers of Hanover Landeskirche. Ferdinand Kattenbusche (1851-1935), a professor of systematic Theology in Gießen, Göttingen und Halle. Julius Wellhausen (1844 – 1918) was among the Repetenten whose name is the epitome of historical criticism of the old Testament, which reached its highest point at the end of the 19th century. His works in Old Testament studies (“Israelitische und jüdische Geschichte“, „Prolegomena zur Geschichte Israels) belong to the classical work of historiography of the 19th century and his critical works relating to the research of the Gospels are foundational in the field of modern New Testament studies. After resigning from his theological professorship, he wrote as an Orientalistic professor in Halle concentrating on Arab and early Islamic history. Bernhard Duhm (1847-1928) was a professor of Old Testament in Göttingen and Basel. His research led to a new understanding of Old Testament prophecy along with Theodor Zahn (1838-1933) a professor of New Testament. Both were Repetenten at the house on Stumpfebiel.
In 1857 the house of Prof. Himly at Stumpfebiel, which served as the academical hospital from 1809 – 1850 served as the acaemical hospital and was changed to housing for Repetenten and students of theology, where they lived and studied together. This all happened on the suggestion of Isaak August Dorner (1809 – 1844), a well known member of the so called “Vermittlungstheologie”. The Tübinger Theological Stift served as a model for this establishment.

In 1867 the old Repetenten institute through was disbanded through a ministerial decree. The Theological Stift, in between the official designation, was placed under the leading of a stiftsinspektor. Among the Stiftinpektors, who worked at Stumpfebiel included the names, William Wrede (1884-86), Carl Mirbt (1886-87), Alfred Rahlfs (1888-90), Rudolf Otto (1895-96), Emanuel Hirsch (1912-14), Erik Peterson (1916-1920), Kurt Dietrich Schmidt (1921-1925) and Hans von Campenhausen (1930-1933). Influenced by the school of Religioushistory in 1897 William Wrede developed a program of New Testament Theology as Traditional history. Above all his work, “Messiasgeheimnis in den Evangelien“ is the basis for Form History as well as newer research in Leben-Jesu-Forschung. Carl Mirbt studied under Hermann Reuters of the University of Götttingen and became a professor of Church history in Marburg. His most important research was in the area of papal history of the high middle ages. For example the collection of text “Quellen zur Geschichte des Papsttums” was wide-spread.

The Old Testment Professor Alfred Rahlfs focused his work on the Greek translation of the Old Testament, the Septuagent and the Reconstruction of the oldest reachable form of its texts. The community of academics which furnished the Göttingen Septuagintaunternehmen in 1908, made it possible. A. Rahlfs was the author the commentary to the Psalas as well as the standard of the two volume handwork of the Septuangent. Rudolf Otto, who worked as a systematic theologian in Göttingen, dedicated his life’s work to the question, how nature and truth of Religious sciences can be grasped by science and terms. Through his mainwork, „Das Heilige“ made him well known more than just within the field of theology. Emanuel Hirsch who was critized for his support of the German Christ (dealing with the third reich). He taught systematic theology in Bonn and Göttingen and wrote volumes of work pertaining to the history of Dogmen and Dogmatics as well as exegesis and practical theology. Especially know are his works ”Geschichte der neueren evangelischen Theologie“ and his „Hilfsbuch zum Studium der Dogmatik.“ Erik Peterson taught as a professor of New Testament and early church history in Bonn. Later he converted to Catholisism and became a professor in Rome. Kurt Dietrich Schmidt worked as a church historian in Kiel and in Hamburg. Hans von Campenhausen in Marburg and Heidelberg.

In 1967 needed to be cleared of people after an examination by the University kuritorium because of its dilapidation. A part of the student housing was relocated in two houses on Kraezbergring street. In 1983 the Theological Stift found a new residence in the old Ernst-August-Hospital, in an classical 1850’s style building on Geiststrasse. The reconstruction of the house, which had been serving the university as a pharmaceutical institute and was supported by the Luteran churches of the confederation of the northwest German churches by more than more half a million DM. In addition, the theological faculty used the land property of the orphanage foundation to finance the reconstruction and with the help of the Klosterkammer the lack of money was filled with 288000 DM. on October 25, 1982 the New old Theological Stift was inaugurated, which was lead by the Ephorus Walter Zimmerli, a professor of Old Testament.

Around thirty-five students live presently in the Stift, coming from a variety of church traditions and countries (i.e. Hungary, Romania, Scandinavia, Switzerland, Togo, Japan. South Korea, Brazil, USA) With 30% of the students coming from foreign countries the Stift has a distinct international and ecumenical profile.

Since Spring of 2004 the Stift has helt an exchange program which began in 1978 with Atlanta and a German-Brazil exchange. Students from the theological Hochschule in Sao Leopoldo (Brazil) and the theoligical stift spend two semesters at each others university and live at the Stirft or on the campus of Sao Leopaldo. In this way the the academic education gets impulse obtain impulse and will be promoted. However, above all, the encounter with each others society and religious culture is a considerable challenge for both sides. Confronted with the report of the need of the direct environment of the University in Sao Leopoldo the stift supports the Children’s day care in Viamão which is not far from Porto Alegre, since the beginning of the exchange with Brazil. 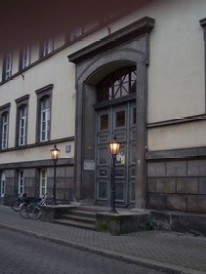