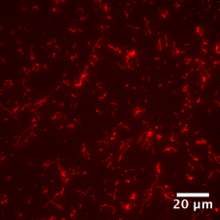 Intermediate filament assembly and network formation
The cytoskeleton provides mechanical stability for the cell. Actin filaments, microtubules, and intermediate filaments are the most important building blocks of these dense intracellular composite networks of biopolymers. While actin and microtubules are highly conserved in eukaryotic cells, each cell type is characterized by its unique (combination of) intermediate filaments. We study in vitro systems of intermediate filaments and aim to understand the hierarchical assembly dynamics from smaller subunits to filaments and subsequent network formation. The proteins are expressed recombinantly in our lab enabling us to perform targeted mutagenesis and study the influence of such mutations on the assembly of the filaments. As the assembly processes occur on the nanometer scale, we employ small angle X-ray scattering, light scattering and fluorescence correlation spectroscopy.
This work is funded by the DFG (SFB 860, MBExC).
Susanne Bauch, Kamila Sabagh, Ulrike Rölleke, Chiara Cassini 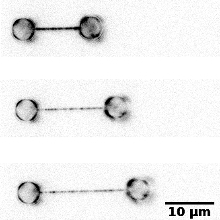 Intermediate filament mechanics
The hierarchical assembly pathway of intermediate filaments gives rise to intriguing mechanical properties, such as extreme extensibility and high flexibility. Thus, mechanically intermediate filaments behave fundamentally different from actin filaments and microtubules. Our goal is to understand how the molecular interactions between the protein monomers give rise to the specific stress-strain response of the filaments. Thus, we assemble single filaments and use optical trapping as well as atomic force microscopy to apply pN to nN forces while controlling the system by microfluidics and confocal imaging.
This work is funded by an ERC Consolidator Grant and the DFG Max Planck School Matter to Life.
Charlotta Lorenz, Anna Schepers, Julia Kraxner, Heidi Somsel 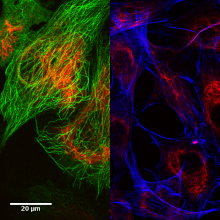 The dynamic cytoskeleton and cell mechanics
The three cytoskeleton filament families of eukaryotic cells (F-actin, microtubules and intermediate filaments) contribute different mechanical properties to the stability and flexibility of cells. We study how the different components determine the mechanical response of cells and how the mechanical and dynamic properties of the single components depend on the cellular environment. For the studies we combine fluorescence microscopy and atomic force microscopy.
This work is funded by the DFG Max Planck School Matter to Life.
Anna Blob, Anna Schepers, Ruth Meyer, Heidi Somsel 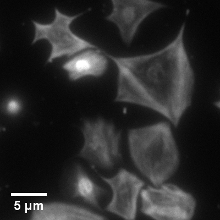 Mechanics of blood cells
Blood platelets play a critical role in blood clotting, yet are a simple model system for cell adhesion, spreading and contraction. They are able to drastically rearrange their actin cytoskeleton and thereby change their shape on a time scale of only minutes. We aim to understand these dynamic processes and characterize the forces the cells impose on their environment. We employ traction force microscopy and fluorescence imaging in this project.
This work is funded by the DFG (SFB 937).
Anna Zelená

Microfluidics
We develop microfluidics methods for a variety of applications. Microfluidics allows us to study biological systems in physiological conditions while simultaneously controlling the flow fields, gradients (e.g. of pH or specific reagents) and confinement. We develop methods to combine these specifically designed microfluidic chambers with different imaging methods. One important focus is the fabrication of microfluidic chips for X-ray measurements. Furthermore, we design microfluidic geometries for applications in biology and biochemistry.
This work is funded by the DFG (SFB 1286, MBExC).
Magdalena Haaf 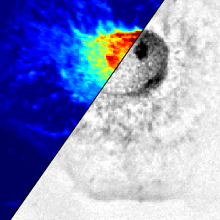 Diffractive imaging of biological cells
Fluorescence and electron microscopy are very well established methods for cellular imaging. We employ diffractive X-ray imaging (scanning SAXS) as a complementary technique. By exploiting the small wavelength and high penetration power of x-rays we have the ability to directly image electron density contrast. Moreover, in addition to scalar intensity data (real space), we obtain structural data (reciprocal space). In the past, we have successfully applied the technique to intracellular structures including keratin and actin bundles and DNA within the nucleus.
This work is funded by the DFG (MBExC) and the BMBF.
Andrew Wittmeier, Chiara Cassini, Jan-Philipp Burchert, Charlotte August