The occurrence of invasive species is throughout the world and the same species cause the same problems in many areas of the world. For the study of invasive species, it is important that we understand the cause and consequence of plant invasion. Road systems within forests for example function as a gate-way for plant dispersal including invasive alien plants which are often introduced by vehicles, animals or human movements along road networks. The invasion of alien species may depend on the forest condition: while introduced species are often found in large numbers in disturbed forest sites, they are rarely observed in intact forests.

Plant species diversity is determined by different factors from individual species to landscape level such as climate, resource heterogeneity, habitat age and diversity, patch size and shape, connectivity, vegetation structure and composition, and disturbance. We expect that the abundance of invasive species decreases with increasing distance to roadsides. In this context, we will investigate the structure and distribution of alien naturalized plant species along a disturbance gradient reaching from primary lowland rainforest over different types of secondary forest up to open roadside habitats. 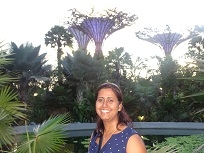