Comparison of microclimate in various land-use systems in Jambi

1. Background
The transformation of forest to agriculture and any other land-use systems is a foremost cause of deforestation and forest degradation in the tropics. Over the last period from 2000 to 2012, the forest cover loss of Indonesia accounted for 6.02 million hectare due to the conversion of primary forest to plantations for the cultivation of oil palm (Elaeis guineensis), rubber (Hevea brasiliensis), and other agricultural land (Margono et al. 2014). Sumatra island alone lost about 550,000 ha of forest per year between 1990 and 2007 (Laumonier et al. 2010). This conversion and clearance of the forest is expected to disturb not only biodiversity and carbon storage capacity of the forest but also biophysical environments such as air and surface temperature, surface albedo, air humidity, and soil moisture.
Forests can influence local climate through various mechanisms. Forests generally have low albedos which means that only small quantity of the incoming solar energy is reflected and thus high amount of energy are absorbed (Betts & Ball 1997). Forests also take up water from soils through their roots and release it into the atmosphere, which have strong influence on the weather and climate (von Randow et al. 2004), like atmospheric and surface cooling.
Although the effects of land-use change on many ecological characteristics and processes such as abundance of species, biodiversity, organic matter decomposition, and soil carbon (Guo & Gifford 2002; Dayamba et al. 2016; Zerbo et al. 2016) have been addressed, the effects of land-use change on microclimate remain poorly understood. Some studies have shown that mean maximum temperatures in logged forest and oil palm plantations are 2.5°C and 6.5°C greater than natural vegetation (Hardwick et al. 2015). During daytime hours, oil palm plantations were 2.8 °C warmer than forest area (Luskin & Potts 2011). Jiang & Wang (2003) reported that replacement of natural forest with rubber plantations had no effect on the local rainfall of the area. However, there are no previous studies on microclimatic effects of the conversion of natural forest to rubber plantations. Thus, it is necessary to understand how microclimate varies with the change in land-use systems in a tropical landscape with forests and oil palm and rubber plantations. To address this question, this research will focus on the comparison of microclimate in various land-use systems in Jambi province in Sumatra/Indonesia.

3. Methods
Study area
The area of study is Jambi province, Sumatra, Indonesia. Meteorological data from 4 different land-use systems (forest, jungle rubber, rubber and oil palm), as well as data from reference meteorological stations in the area, will be analyzed.
Data
Micrometeorological measurement of air temperature, air humidity, soil temperature, and soil moisture have been carried out continuously at hourly interval using thermohygrometers (Galltec Mella, Bondorf, Germany)) at 2 meters above the soil surface and soil moistures probes (IMKO Trime-PICO, Ettlingen, Germany) in 30 cm depth (Drescher et al. 2016). In total, 32 different plots in 4 different land use systems (forest, jungle rubber, rubber and oil palm, 8 replicates from each land use distributed in 2 different landscapes) were investigated. The meteorological reference stations (n=4, two in each landscape) are located on grassland and include additional measurements of radiation (CMP3 pyranometer, Kipp & Zonen, Delft, The Netherlands) and rainfall (2precipitation transmitters Thies Clima, Göttingen, Germany), soil heat fluxes (model HFP01, Hukseflux, Delft, The Netherlands), wind speed (with a 3-cup anemometer, Thies Clima, Göttingen, Germany) wind direction (Thies Clima, Göttingen, Germany) and 2 additional thermohygrometers (Thies Clima, Göttingen, Germany) located at 0.5 and 2m.
Data analysis
The mean and the standard error for the climate values will be calculated and the values will be compared between 4 different land-use systems. The daily standard deviations of the maximum and minimum of each climate variable will also be estimated as well as an evaluation of diurnal cycles and a study of seasonal variations. The longer term variation of all available climatic series including measuring during a strong ENSO event will be assessed. 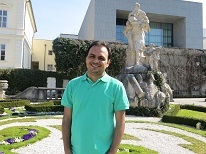